The crape myrtle is a fan favorite in the southern landscape. Across the region, its pink, lavender, red and white flowers can be spotted along streets, in cities, parks and yards. They are loved for their gorgeous flowers and smooth bark, but also prized for their drought-hardiness and ability to withstand pests. That is, until now.

With the arrival of a new insect, crape myrtles may no longer be considered an easy and low-maintenance tree. Crape myrtles that are infested with the newly-introduced crape myrtle bark scale will likely require active pest management to remain healthy and beautiful landscape trees. 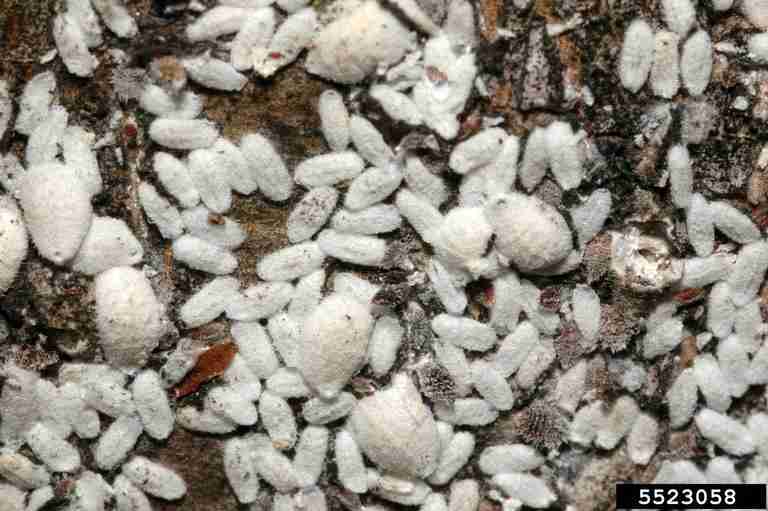 The crape myrtle bark scale is native to Asia and was first found in the U.S. in 2004 near Dallas, Texas. The best guess is that the scale arrived unintentionally and undetected on infested plant imports. Since its arrival, the bark scale has spread across the Southeast. In August 2016, it was first detected in North Carolina in Iredell County.

Identifying it. Often, the first thing that is noticed when a crape myrtle is infested with this scale is the presence of sooty mold. Sooty mold is a black fungus that grows on honeydew, the excrement of plant-sucking insects such as scales and aphids. It is much more prominent than the teeny, tiny insects that cause it. Upon closer inspection, the scale insect is visible. Nymphs are pinkish in color and adult females are covered in white or gray felt-like ovisacs. If crushed between two fingers, a pink liquid can be seen.

The crape myrtle bark scale is one of the only scale insects that infests crape myrtle. Often, sooty mold can be caused by the more common crape myrtle aphid, so it’s important to look closer if sooty mold is observed. When infestations first begin, scales prefer the rough areas on the bark. As the infestation grows, however, the scales may be found more uniformly on the bark of the tree. 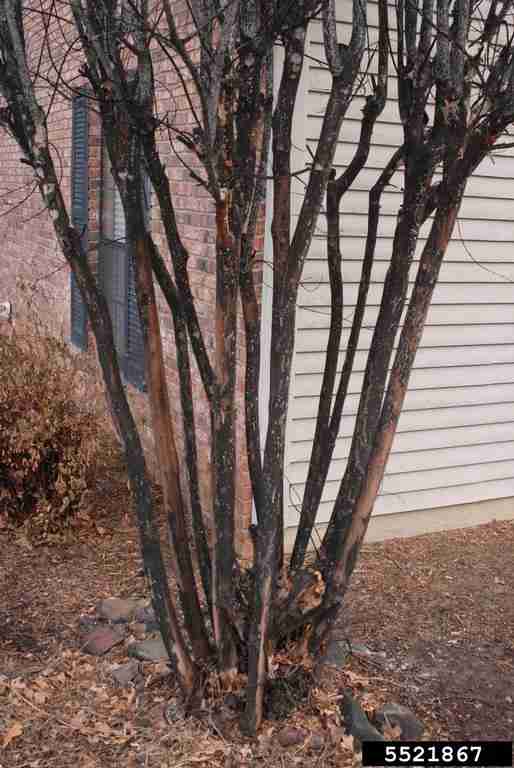 This crape myrtle is covered in sooty mold. With a closer look, one can spot the white spots that are the crape myrtle bark scale. Image: Jim Robbins, Univ. of Arkansas CES, Bugwood.org.

Damage caused. This scale can cause considerable damage to trees. Not only will heavy infestations stunt growth, but branch dieback is possible, leaving entire branches of the multi-stemmed crape myrtle dead. Some reports indicate the plant may have less blooms as well. Besides the aesthetic damage of sooty mold turning tree trunks black in color, sooty mold can also limit photosynthesis capabilities. To keep crape myrtles the vibrant and healthy trees they’re loved as in the landscape, trees infested with the crape myrtle bark scale will likely need regular pest management.

Management. Management of crape myrtle bark scale may not be as straight-forward as the identification of the pest. First and foremost, if planting a crape myrtle in the landscape, inspect it for signs of the scale before it is planted. The last thing you want is to start with a problem that needs addressing.

Another option is to physically remove the scales from the tree using a mild detergent solution and stiff-bristled brush. The scales and sooty mold can also be removed using a high-pressure wash. Brushing the scales off will remove them from the plant but will not prevent re-infestation, so regular monitoring is a must. Several types of ladybugs are predators of the scale as well, so releasing these beneficial insects can reduce an infestation.

There are also pesticides that are available to combat this pest. Neonicotinoid pesticides applied as a soil drench have shown to be most effective so far. However, one of the more commonly used neonicotinoids, imidacloprid, is known to be harmful to pollinators. Therefore, homeowners should instead consider using dinotefuran to treat the flowering bee-favorite crape myrtle. In addition, insect growth regulators (e.g., pyriproxyfen, buprofezin) and horticultural oils used at the heavier dormant rate may also be effective. As always, it is critical to read the label before applying pesticides. Timing and appropriate application won’t just garner better control results, but the label is the law!

Report it! If you suspect you have an infestation of crape myrtle bark scale, there are several ways it can be reported to track its spread in our state. Take a photo and send to newpest@ncagr.gov, contact your local plant pest specialist or report it via 800-206-9333.