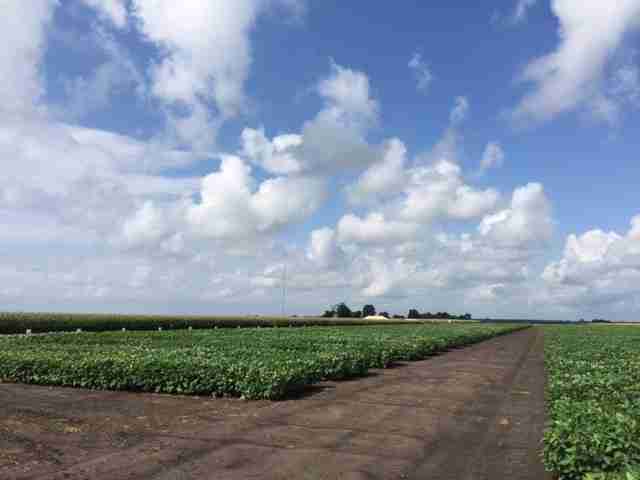 For a department that touches the life of each and every N.C. resident on a regular basis, it’s tough to come up with a year in review that’s not the size of a small town’s phone book.

The NCDA&CS has more than 2,000 employees located across the state. We are present in all 100 counties through our services to agricultural producers, landowners and residents, and through our regulatory, consumer-safety and inspection programs. We administer more than 75 different laws and programs that protect and promote the health, safety and welfare of North Carolinians.

That’s just a small sampling. We have 20 divisions, each doing multiple functions.

We take our work very seriously, and we should, because agriculture and agribusiness are North Carolina’s largest industry. N.C. State University economist Mike Walden has determined the industry’s economic impact is $84 billion. (That’s a $6 billion increase from the previous year.) The industry accounts for more than 686,000 jobs, which is 17 percent of the state’s workforce.

In reference to 2016, Commissioner Troxler said, “It’s been a challenging year, but a rewarding year.” And with 93 of the state’s 100 counties under a state of emergency at one point or another, we can understand why the year in review for agriculture included impressive disaster response. Read below for a month-to-month recap.

January: Ban on poultry shows and sales is lifted 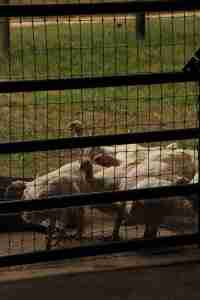 The suspension and registration requirements were originally put in place to guard against the introduction and spread of highly pathogenic avian flu after almost 50 million birds in the Midwest died or were depopulated due to the disease outbreak in 2015. The N.C. suspension was announced in June 2015, during the height of the Midwest outbreak, to allow people time to prepare for the changes. The statewide ban included poultry shows at the N.C. State Fair, Mountain State Fair and county fairs, live bird auctions, poultry swap meets and other places live birds were on display. Private sales between individuals were allowed to continue.

The ban was put in place to protect the state’s commercial poultry industry, which is integral to our state’s economy.

The 11th annual Ag Forum, held during the Southern Farm Show, drew standing-room-only crowds. A panel of family farmers representing the Foothills, Sandhills and Eastern North Carolina discussed challenges and opportunities in their respective regions of the state, and how they balance farm and family life.

Another group of presenters featured representatives of food banks, supermarkets and hunger-relief groups, who focused on ways that North Carolina is addressing hunger and food insecurity. 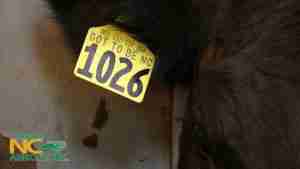 The new program uses special ear tags to identify N.C.-born-and-bred cattle, swine, sheep and goats. The voluntary program is a collaboration between the department’s Got to Be NC marketing program, Livestock Marketing Section and Veterinary Division.

To qualify for the program, ranchers must be North Carolina residents, and participating animals must be conceived and born in the state. Participating livestock must be identified with an official Got to Be NC tag purchased by the producer before they are sold. The tags cost $5 apiece. Ranchers must complete a producer tag record and submit it to the department after tagging their animals.  In addition to promoting livestock, the tags also will help producers comply with state and federal laws governing interstate transportation of animals. 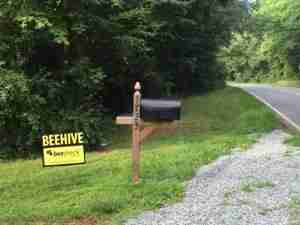 This online mapping service is to help prevent crop damage and bee deaths due to accidental/unintended pesticide drift. Producers of horticultural and organic crops can map their field location using the DriftWatch program. As a companion program, BeeCheck will allow hive owners to map the locations of beehives. Pesticide applicators can access both databases before treating a field to identify sensitive sites that are close to the spray areas.

Response to Field Watch has been tremendous. More than 1,300 apiaries, 1,100 specialty crop acres and 32 applicators have signed up so far. This surpasses other states that have had the program a lot longer. Our goal for 2017 is to continue to educate and increase participation in the program.”

Fieldwatch is part of the department’s ongoing efforts to promote pollinator health and populations in the state. 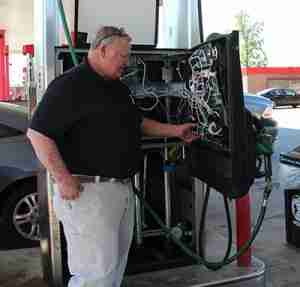 Thieves can install credit card skimmers at the pump. When a customer swipes their card to pay, the skimmer copies the account data from the magnetic stripe on the back of the card, along with the PIN if it is a debit card transaction.

The sweep had the increased awareness of card skimmers among gas station owners. Inspectors showed managers pictures of skimmers and what to look for to protect themselves.

An additional sweep in October of 12 more counties checked 835 stations and 6,287 dispensers. No skimming devices were found.  The department has fielded nine request to inspect locations for fraudulent activity and have found three skimmers based on these inspections.

Although it wasn’t a record year, consumers had a lot of reasons to feel blue (berry). Markets, grocery stores and pick-your-own farms had plenty of berries well into the summer.

The majority of N.C. blueberries are sold directly to consumers at local farmers markets, roadside stands and you-pick farms. North Carolina is the seventh-largest producer of blueberries in the nation, yielding 48.8 million pounds in 2014. Bladen County is the top producing county with more than 3,000 acres of blueberries. 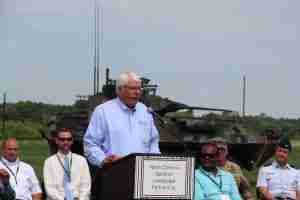 The announcement was made at Cherry Research Farm by leaders of the state’s military installations, county managers, representatives of conservation and environmental groups and other public and private partners. The designation is part of a joint federal partnership between the U.S. departments of Agriculture, Interior and Defense that aims to strengthen farms, ranches and forests while conserving habitat and natural resources and protecting vital training grounds for military installations. 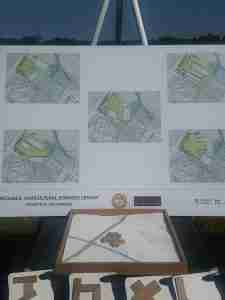 The Agricultural Sciences Center will be built with $94 million in funding from the Connect NC bonds that voters approved in March 2016. It is the first of the bond-funded projects to have its designer approved by the State Building Commission.

The laboratory complex will contain offices and labs that perform tests for four of the department’s divisions: Food and Drug Protection, Standards, Structural Pest Control and Pesticides, and Veterinary. The building will replace four labs whose average age is more than 40 years.

“The services provided by these labs is important to our citizens, our farms and our businesses,” Troxler said. “Locating them together in a new and modern, central facility will enable us to be more effective and efficient in meeting the needs of a growing state and our $84 billion agriculture industry.”

The department’s Food and Drug Protection Division received a five-year, $5.3 million grant from the Food and Drug Administration to enhance produce safety. The funding will be used to ensure that North Carolina farmers and producers are ready to comply with the stricter production and harvest requirements of the federal Food Safety Modernization Act.

“This funding will help our Food and Drug Protection Division support farmers and producers in getting their businesses ready to meet these new requirements,” Troxler said. “I am a firm believer in educating before regulating, and this funding will support training opportunities, on-farm readiness reviews and other education and outreach opportunities. This funding allows us to develop our inspection programs to meet the specific growing and harvesting needs of the farmers in our state.” 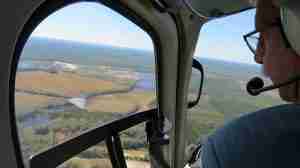 While the department was preparing for the N.C. State Fair, Hurricane Matthew barrelled through the state. Matthew caused flooding as significant, or in some cases more significant, as Hurricane Floyd. The high water left all livestock at our Cherry Research Farm unreachable and all permanent structures partially flooded or unreachable. Commissioner Troxler spent the next week touring damaged areas and was amazed by the magnitude of the flooding, saying there was “catastrophic damage to farming operations all across the East.”

The department’s incident command center was staffed around the clock to assist farmers and businesses devastated by the flood. NCDA&CS employees worked to help farmers and others affected by Matthew. Department activities included airlifting supplies to farms that were cut off from roads; providing guidance and resources for the sheltering of pets at emergency shelters in several affected counties; delivering food to support emergency feeding operations; and assessing damages to farms. In addition, about 150 members of our N.C. Forest Service were dispatched to clear roads with chain saws, assist with sandbag operations to reinforce dams, and help with various local emergency operations.

The total impact from Hurricane Matthew on agriculture may not be known for some time. Farms lost 2,800 swine, 1.8 million poultry and sustained an estimated $400 million in field crop loss. The landscape and nursery industry recorded $20-plus million in losses. These numbers don’t reflect flooded equipment or barns. 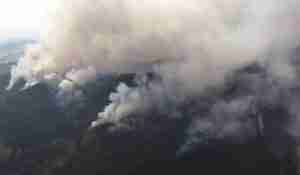 On the heels of Hurricane Matthew came the devastating wildfires in Western North Carolina. Many described the wildfire conditions in the western part of the state to be similar in severity to a California wildfire season. At one point, more than 73,000 acres were burning in multiple fires in North Carolina and neighboring states.

Fighting these fires took teams from more than 30 other states as well as volunteer firefighters, our N.C. Forest Service, the U.S. Forest Service and other in-state firefighting units. “We have received notes of thanks and I have talked directly to other states that were here helping us,” Troxler said, “and they have said that they now know Southern hospitality is a real thing.” Response to the fires was department-wide, with other divisions lending staff, resources and technical support. The Research Stations Division assisted in pulling together a Thanksgiving dinner for more than 250 firefighters in Robbinsville.

The department and DuPont completed the company’s donation of 476 acres inside DuPont State Recreational Forest to the state. The property, commonly known as the “doughnut hole,” was the site of a DuPont plant from 1956 to 2002. Demolition of the plant was completed in 2006. The addition of the acreage brings the size of the state forest to nearly 11,000 acres.

The forest is managed by the N.C. Forest Service. Public uses of the newly obtained acreage could include parking, hunting and a shorter route to Bridal Veil Falls. However, public access will be a few years away as the NCFS develops a long-range plan that meshes with DuPont Forest’s master plan. Sensitive environmental and natural areas are present on the 476-acre site, and any protective restrictions will be included in the final public access plan for the property. Future uses will also likely involve partnerships with the N.C. National Guard. Uses could include shared office space and low-impact training, such as on- and off-trail patrolling, land navigation, mountain terrain familiarization and Helicopter Aquatic Rescue Team training.