The health of our forests: 2016 year-in-review

Between the destruction of Hurricane Matthew in the eastern part of the state and the relentlessness of the many fires in the West, North Carolina has seen its fair share of natural disasters this year. Damage caused by insects and disease pales in comparison, but their activity over the past year nevertheless impacts much of our forest land.

NATIVE PESTS
Most often, our forests are resilient and accustomed to native pests. Periodically, outbreaks can occur and damage can be widespread and conspicuous. In 2016, a few native insects were more active than usual. Of some concern to forest landowners and managers, a couple of small Southern pine beetle spots popped up.  The Southern pine beetle is considered the “most destructive forest pest in the South.” Outbreaks of this native beetle cause extensive damage a timber losses. The last major outbreak in N.C. was in the western part of the state in the early 2000s. While there were only two active and one inactive spots detected in 2016, they were the first to appear in years.

For the second year in a row, a large forest tent caterpillar outbreak was observed in the Roanoke River area, primarily in Bertie and Martin counties. Approximately 100,000 acres were affected, causing unsightly defoliation of bottomland hardwood trees. While a single year of foliage damage typically does not cause long-term effects to overall tree health, continued defoliation may stress or weaken trees, predisposing them to secondary pests.

Locust leafminer populations were also higher than usual throughout the western part of the state, leaving mountainsides of black locust trees looking bronze in appearance. Beetle larvae mine the leaves and adults skeletonize the leaves. These beetles typically do not cause long-term impacts to the trees they infest, but their presence can be quite apparent. 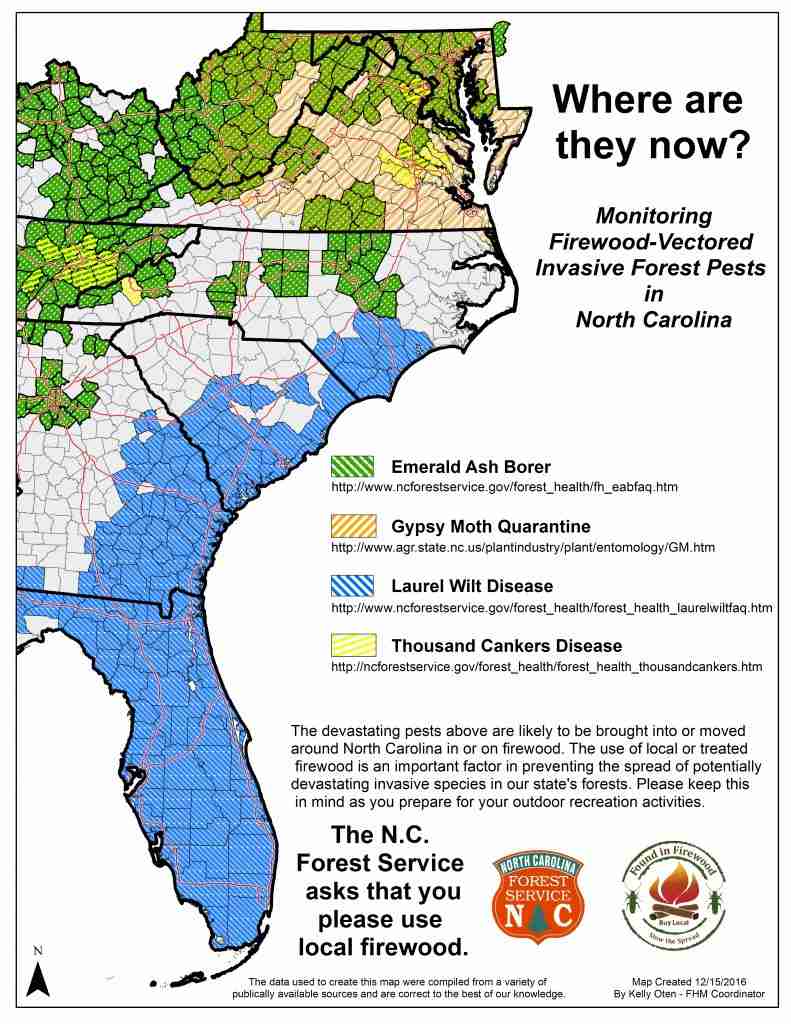 EXOTIC INVASIVE PESTS
Newly introduced pests, on the other hand, tend to have devastating impacts on our forests because trees typically lack appropriate defenses needed to cope with them. Since 2010, three non-native invasive species were detected for the first time in the state: laurel wilt (2011), thousand cankers disease of walnuts (2012) and emerald ash borer (2013). All three of these threats can be accelerated by the movement of firewood.

This year, laurel wilt was in two additional counties, bringing the total number of counties affected in the state to nine. This disease is now found in portions of Bladen, Brunswick, Columbus, Duplin, New Hanover, Onslow, Pender, Robeson, and Sampson counties. There is little that can be done to protect our native redbay trees.

The emerald ash borer was detected in six additional counties this year, bringing the statewide total to 24. The N.C. Forest Service will continue to monitor for this insect in coming years. Homeowners and landowners are encouraged to treat or remove infested ash trees, but do not move potentially infested material offsite.

The entire state of North Carolina has been monitored for gypsy moth since 1982 through a program within the Plant Industry Division. The 2016 trapping season is complete and 7,235 moths were captured in 3,172 traps. This is higher than in 2015, when 2,021 moths were captured in 915 traps. These trap captures, along with winter egg mass surveys, will play a role in 2017 treatment determination.

The gypsy moth has historically been held at bay from becoming established in North Carolina, with only two counties being quarantined for the pest since 1988 (Currituck County and parts of Dare County). These two counties remain the only two with a gypsy moth quarantine in place.