In recent years, pine trees in North Carolina have seen their fair share of ice storms, polar vortexes, and snow and ice weight in the cold winter months. Trees are safe from these threats in the heat of the summer, but there’s one snowy-looking critter that still has its sights set on our pines. 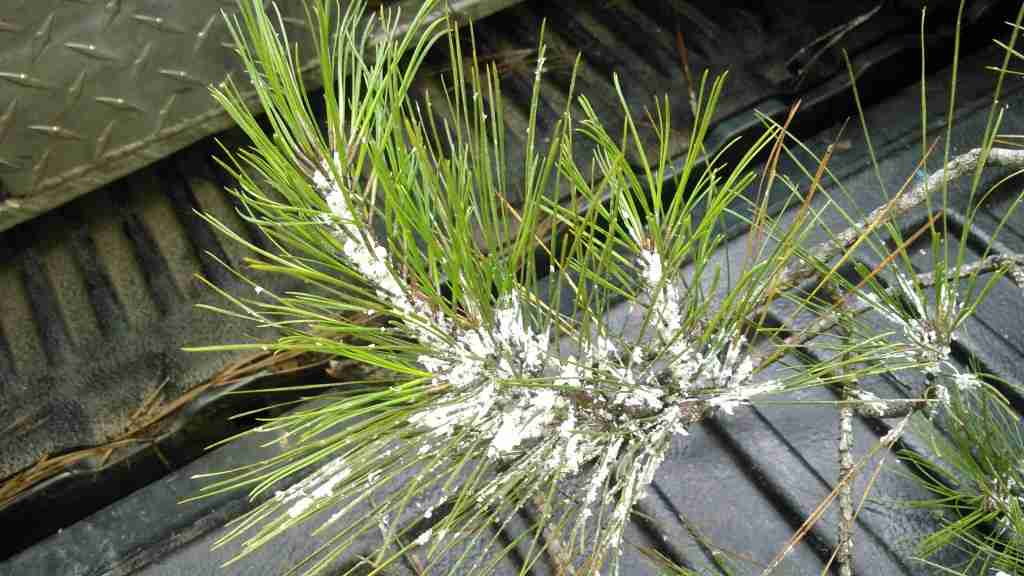 The woolly pine scale is a small, soft-bodied insect that produces a white, waxy mass. This woolly product is snow-like in appearance and obscures the sight of the insect itself, often making first observers wonder if it’s an insect at all. While the abundant production of woolly wax may look threatening, the pest typically isn’t a major threat to overall tree health.

Under most conditions, natural enemies such as parasitoid wasps, green lacewings and scale-feeding snout moths keep woolly pine scale populations in check. While not common, outbreaks can occur and may lead to stunted shoot growth, branch dieback and in some cases, tree mortality. Significant feeding can also stress or weaken the tree, making them susceptible to other pests. These sudden peaks in woolly pine scale populations are often associated with insecticide applications that negatively impact those natural enemies responsible for keeping scale populations low. Outbreaks typically subside on their own in a year or two, but if damage reaches an intolerable level, treatment should target the crawlers when they first emerge in the spring.

Paired with the white woolly masses are obvious growths of black sooty mold. Sooty mold fungi grow on honeydew, the sweet and sticky waste product produced by the scale. While an eyesore, the fungus itself does not hurt the tree, although it may block photosynthesizing abilities of the tree or attract bees, ants and wasps.

So while landowners should monitor their infested pines for population fluctuations, they will not likely need to respond with a control measure. In most cases, this insect’s biggest offense is reminding us of snow in the hottest summer months!