Leaf me alone! Trees along Roanoke River defoliated for the second year

It’s not hard to miss: trees in the Roanoke River area with young, new leaves or with no leaves at all. But wait, it’s almost summer, they’re supposed to be flush with lush green leaves! What’s going on?

If you’re headed towards the coast on Highway 64, pay attention while passing through the Roanoke River area. Countless forest tent caterpillars are hard at work eating the leaves of many hardwood species found in the area. Chances are, if you stop, you’ll see the caterpillars crawling around you and climbing up the trees.

The forest tent caterpillar is an important native defoliator. Normally, they aren’t a serious problem and populations are kept in check by native predators that nest in the ground below the hardwoods. Despite these normal low-level populations, periodic outbreaks do occur.

Last year, about 80,000 acres were defoliated in the Roanoke River area. This year, the outbreak is worse. Aerial surveys conducted by Bertie County Forest Ranger Mike Hoggard and Josh Powell, service forester for the district, indicated that this year’s outbreaks cover an estimated 100,000 acres. Damage can be seen along the river from the Scotland Neck area past Plymouth where the river feeds into the Albemarle Sound.  The Great Dismal Swamp also has an outbreak this year. The outbreak is so bad, that for the second year in a row, the defoliation has also been detected by U.S. Forest Service remote sensing (i.e. via satellite).

A leading hypothesis for the recent outbreaks is based on the unusual weather events we’ve been witnessing lately. Since North Carolina received significant rainfall all winter and spring, it’s thought by some that many of the predators that typically keep caterpillar populations low did not survive the prolonged flooding in the river basin. Typically, an outbreak lasts for several years before predator populations build up to the level where they can again control the forest tent caterpillars.

Can anything be done to protect the trees? The N.C. Forest Service is monitoring the outbreak but there’s nothing anyone can do to slow it down. This is nature running her course and we are spectators. Repeated years of defoliation can take its toll on tree health but widespread mortality isn’t expected, as trees are putting on new leaves for the summer. Hopefully, we will see areas returning to normal next spring! 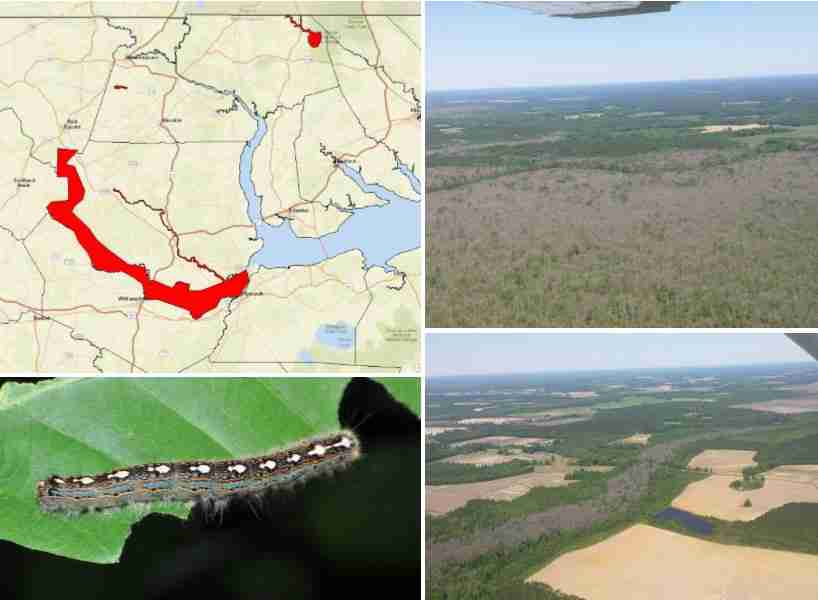