The emerald ash borer put on a big show in 2015. Last year, the tree-killing beetle was found in 14 North Carolina counties, bringing the total infested counties in the state to 18. Previously, it was only known to occur in four counties along the Virginia state line. Not only were last year’s detections of the beetle surprisingly abundant, but they were also widely scattered across the state. The hopes of a slow-moving infestation spreading through North Carolina vanished. The emerald ash borer became Public Enemy No. 1 when it came to N.C.’s forests.

The emerald ash borer is native to Asia and was first found in the U.S. in 2002 near Detroit when ash trees started dying. Further investigations revealed it may have been there 10 or more years before it was noticed. Since then, it has spread throughout the U.S., killing ash trees. There is no good estimate on the mortality it has caused to date, but many believe it undoubtedly reaches into the millions.

The emerald ash borer is known for being elusive. As was the case with the first detection in Detroit, many reports indicate that the beetle infests a tree for several years before symptoms like a thinning canopy are observed. And when the insect is a wood-boring one that feeds and lives covertly within the tree, the tree’s outward appearance is often the only indication it is there.

There are pesticides available for those wanting to protect or save their trees from emerald ash borer attack. It is recommended to wait until the emerald ash borer is within 10-15 miles of a given tree before treatments begin, however. Treating too soon wastes pesticide and causes unnecessary chemicals to be put into the environment.  On the flip side, waiting too long may leave your tree exposed to the cryptic yet damaging first few years of infestation. In either scenario, identifying where emerald ash borer is within the state can help homeowners and natural resource professional plan protective chemical treatments.

The N.C. Forest Service continually tracks known emerald ash borer sites in the state and makes this information available to the public. This map, which indicates infested areas, is updated regularly as new infestations are found. Not only do these detections come from concerned citizens reporting suspect infestations, but surveys and trapping are conducted each year to monitor the beetle’s spread.

The N.C. Forest Service just began emerald ash borer trapping season for the year. Traps are tall, purple prisms that attract emerald ash borer with both a lure and a specific shade of purple. Traps were deployed over the past several weeks and will be checked for the next three months. Statewide, 45 traps were set through collaborative efforts by the N.C. Forest Service, Duke Forest, Roanoke River National Wildlife Refuge, the City of Charlotte’s Urban Forestry Program, and the City of Durham’s Urban Forestry Program. In addition to trapping, road surveys, aerial surveys, and river surveys conducted by the N.C. Forest Service also contribute to detection of this pest. 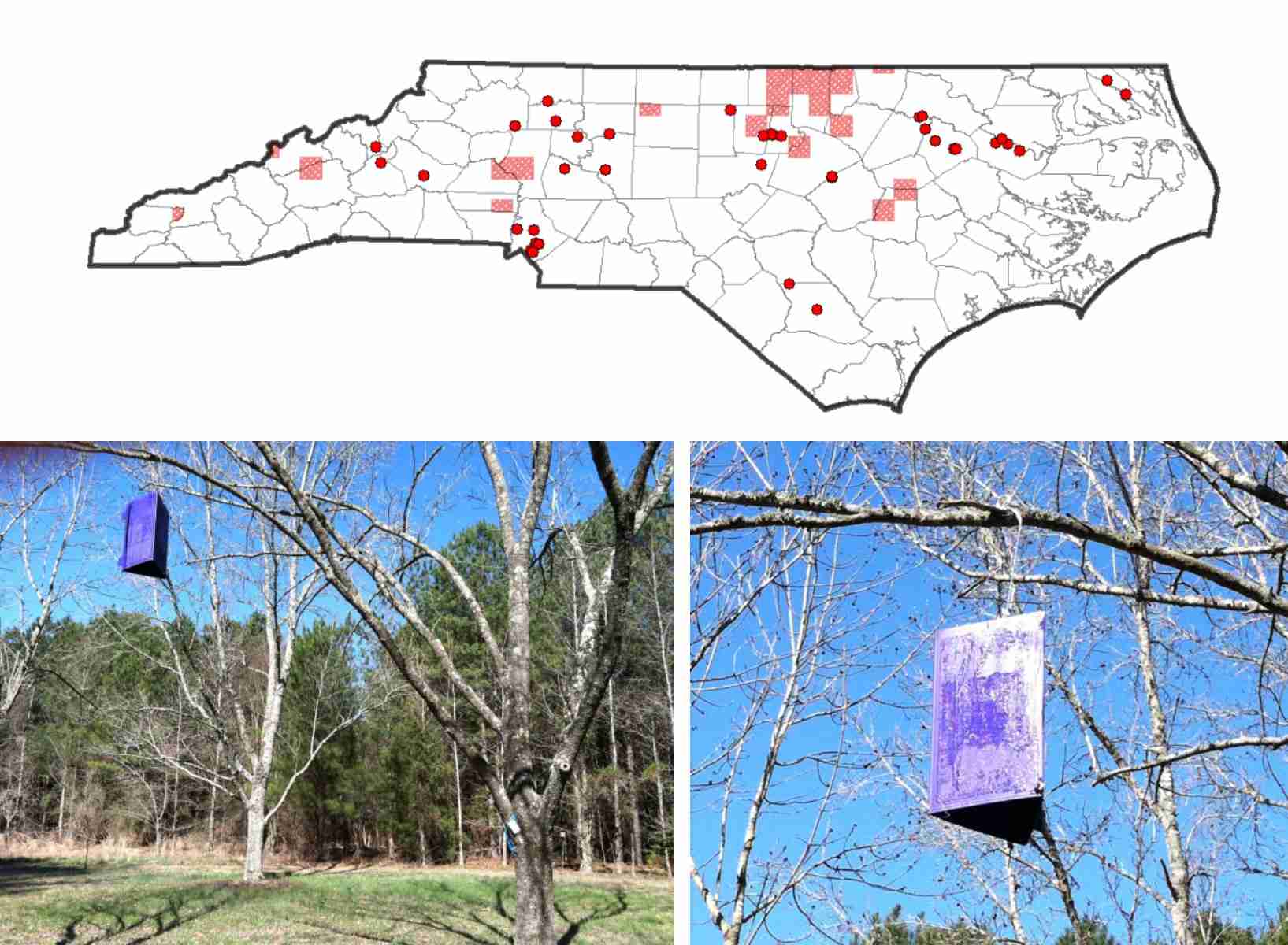