Got to Be NC Recipes: Ballpark Boiled Peanuts

Baseball stadiums across the state are welcoming back the boys of summer. And whether you are a fan of the Asheville Tourists, Durham Bulls, Winston-Salem Dash, Burlington Royals, Carolina Mudcats, Charlotte Knights, Greensboro Grasshoppers, Hickory Crawdads or Kannapolis Intimidators, one thing is for sure, you can enjoy some North Carolina-grown peanuts while cheering on your team.

Chances are good that the bag of peanuts you pick up at the stadium were grown right here in North Carolina. Many Major League Baseball teams use Hampton Farms peanuts, so look for the Got to Be NC logo on the bag.

North Carolina peanut growers produced 400 million pounds of peanuts in 2014, which ranks us sixth in the nation in production. Leading peanut producing counties are Martin, Pitt, Halifax, Bertie, Edgecombe and Hertford. Most N.C. peanut farmers grow the Virginia-type peanut that is most often sold as cocktail peanuts or as the in-shell peanuts that are popular at ballgames.

One summer-time staple for many Southerners are boiled peanuts, which can be a bit of an acquired taste for those not familiar with this style of peanut. The recipe below for boiled peanuts is provided by Bertie County Peanuts in Windsor. This company has been growing peanuts in the state since 1915. 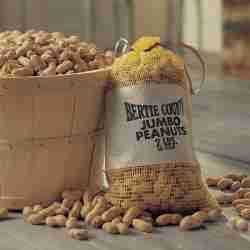 Boiled peanuts are usually served as a snack, but they make a great substitute for dried cooked beans at any meal. They may be eaten hot, at room temperature, or chilled in the refrigerator and eaten cold, shelling as you eat. They will keep in the refrigerator for several days, or can be frozen for later.

Also, if you are visiting the Carolina Mudcats, Kannapolis Intimadators, Greensboro Grasshoppers or Wilson Tobs, check out special in-stadium Got to Be NC promotions.