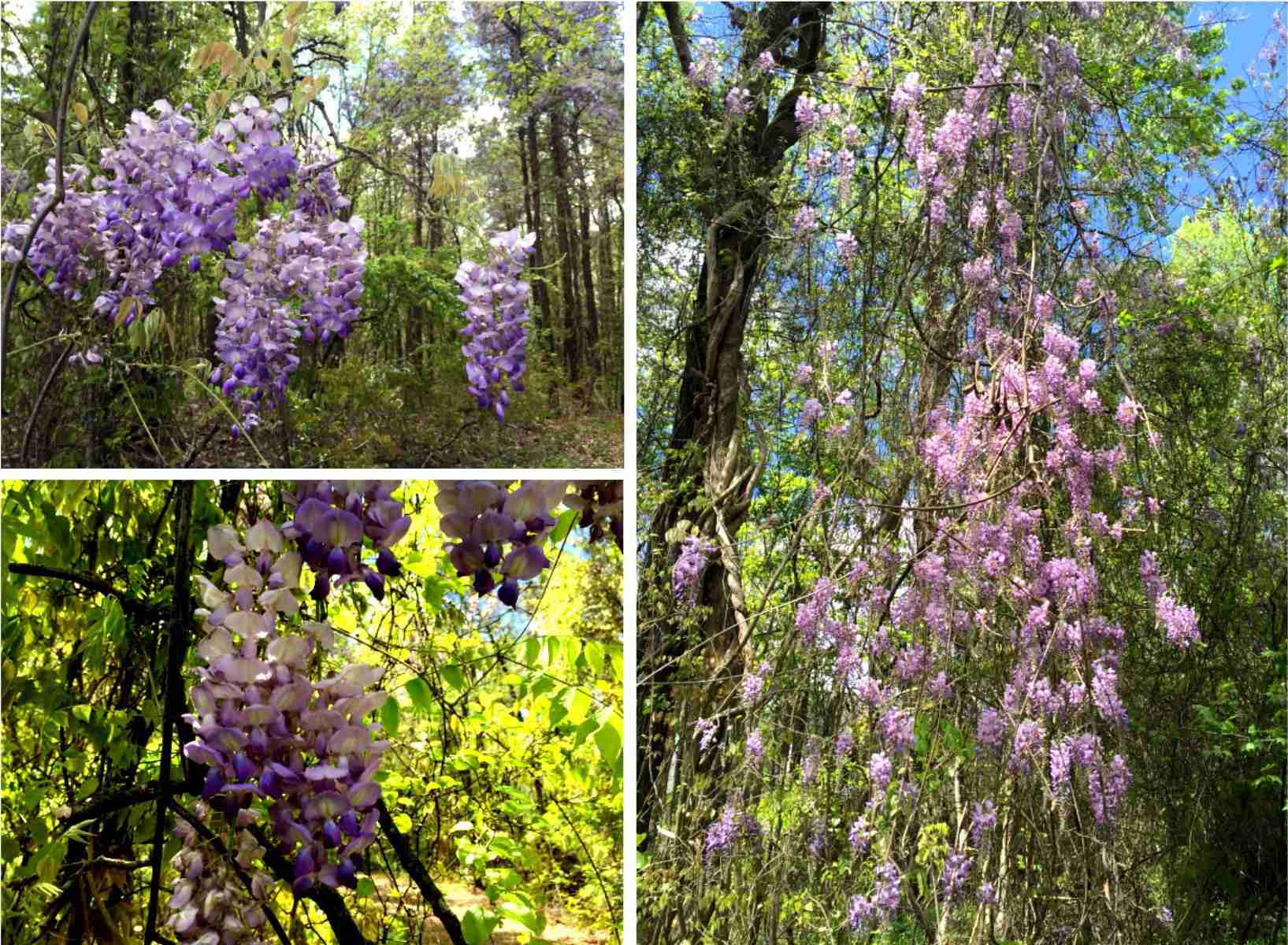 For the past few weeks, many North Carolina treetops have been clothed with a gorgeous drooping purple flower that reaches high into forest canopies. The thought by many is that the plant is a stunning reminder that spring has arrived — and they’re right! The purple blooms are breathtaking and prized by many for their landscapes and gardens. They ascend to great heights, often higher than 50 or 60 feet! But don’t let the beauty of Japanese and Chinese wisteria fool you … the plant’s attractive exterior is deceitful.

Non-native wisteria may be pretty, but it is a major threat to the native forests it invades. Images: K. Oten, NCFS.

Wisteria is considered one of the more damaging invasive plants in our forests. When non-native wisteria escapes cultivation to the natural forest setting, it isn’t the innocent, pretty plant as originally intended. Not only can wisteria block light and water for forest plants, but the woody, heavy stems can pull large trees down by their sheer weight. Even worse, the vines wrap tightly around tree trunks, slowly cutting into the bark and strangling the tree as it attempts to grow outward in diameter. But not all problems are up in the air. On the forest floor, wisteria can trail as a vine or create dense, shrub-like thickets that interfere with natural regeneration of the forest, leaving little to replace the dying overstory.

This flower power arrived in the U.S. long before the 60s and 70s. Non-native wisteria first showed up stateside in the 1800s. The plants were desired for not only their beauty, but for its rapid growth and dense foliage. These characteristics make them ideal plants for gazebos, walls, porches and gardens. They are also the same characteristics that enable them to invade quickly and densely in our forests. For those wanting a plant with the appearance of wisteria without the threat to our native forests, there is a native wisteria suggested by many as a substitute to the Japanese or Chinese cultivars. The flowers are more compact and similar to a pinecone in shape, but the purple showiness is there each spring, without the potential risks.

For those who are taking on the plant in their own backyard, a multi-pronged approach is often best. Entire plant removal or cutting the vine at its base paired with judiciously applying appropriately-labeled herbicides often yields the best results. Fair warning: engaging this invasive plant in battle will test your patience.  Wisteria sprouts will need to continually be retreated until the plant exhausts its remaining resources.