A walk in the woods leads to unique find

This blog post was written by N.C. Forest Service Conifer Silviculture Staff Forester Bill Pickens about an exciting find in the woods that takes us back to a forgotten piece of our state’s history.

I recently took a walk back in time through a forest stand in Nash County with N.C. Forest Service Water Quality Forester Aaron Levine and our colleague, Forestry Consultant Ricky Swanson. It was Aaron and Ricky who first discovered the tract – a forested pine stand with remnant longleaf pine trees nearly 100 years old. 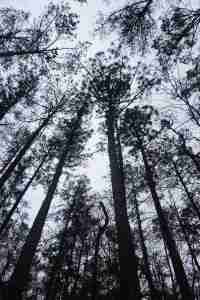 This 95-year-old Longleaf Pine, Pinus palustris, is located just outside the range of longleaf in western Nash County.

Western Nash County is outside of the normal growing range of the longleaf pine. The fact that these relic pines had survived all these years on the western edge of the range was intriguing enough, but we also found several “cat-face” stumps still intact and standing.

If those trees could talk they would tell a tale of days long gone when the woods were intensively worked to collect the gum of the longleaf pine tree. Resin or crude turpentine is produced when the bark is removed in a chevron slash that creates the open wound or “face.” The resulting resin drains into a notch, or box, cut into the base of the tree to be collected and distilled into turpentine. Cat-faces like the ones we found were often 20 feet tall and cut into three sides of the tree. In the 1800s, turpentine was a highly valued product used for medicine, paint thinner, lamp fuel and processing rubber. Turpentine was the third largest export of the South, behind cotton and tobacco. North Carolina accounted for as much as 95 percent of the production until after the 1860s when producers moved further south in search of fresh forests.

Besides the remnant, living longleaf pines, the half dozen or so cat-face stumps, and the location of the tract in western Nash County, another unique feature of the tract is the site itself. The snags we found are adjacent to, or within, a streamside management zone delineated by Aaron for planned timber harvest. The predominant soil type, a Norfolk loamy sand, is well drained, but is considered wet in nature adjacent to the intermittent streams. Of course, since “palustris” is Latin for “of the swamp” we know longleaf does indeed thrive in these wetter, well-drained, sandy soils. Nonetheless, I couldn’t help but wonder how frequent, low-intensity fire shaped this forest before European settlement.

The turpentine industry in the South declined dramatically in 1910; not long before the forest we were standing in began. As we walked out of the woods that day I asked myself a question that perhaps I will never know the answer to, “How old are these snags and in what year did the first ‘box and hack’ occur?” Another question that remains unsolved, and to me is a unique feature that I had not seen before, was the horizontal hacks seen in these snags for the first couple of feet. “Why are those hacks not diagonal like the majority of the cat-faces we find?”

Aaron is leading an effort to harvest and preserve the cat-faced snags, as the tract is soon to be harvested and the snags likely destroyed.

”I’m hoping to have two of the largest ones preserved in a totem-pole fashion and displayed at both Clemmons and Jordan Lake Educational State Forests and possibly Bladen Lakes State Forest,” Aaron remarked.

“We also intend to preserve a smaller portion of one cat-face to become part of the longleaf display the NCFS uses at workshops and other information and education events.”

“Removing resin (or crude turpentine) from the longleaf pine was a laborious task. First a quart size hole, or “box,” was hollowed into each side of the tree about a foot from the ground. Using a scraper, called a “hack,” a strip of bark was removed above the box. This strip, or “face,” was twelve inches wide and twenty inches long. Resin would seep from the trees, flow down the face and into the box. The box was emptied seven or eight times per year. This “dipping” of turpentine did not kill the longleaf pine since the resin is not part of the tree’s nutrient system. The face would be extended each season until it reached a height of about twenty feet. At that height the tree would cease to produce enough crude turpentine to be profitable. Once removed from the longleaf pine, kegs of crude turpentine were taken to distilleries, put into large copper kettles and brought to a boil. The resin would vaporize and condense in a cooling tower. The condensed liquid became the refined or “spirits” of turpentine. Spirits of turpentine were used in paints and medicines, as a solvent, a fuel for lamps, and in processing rubber in the 1800s. The rosin left in the bottom of the kettle would be used for waterproofing leather or mixed with lard and lye to season home made soap.”