In the Kitchen with Brian and Lisa: Social Media Recipe Roundup 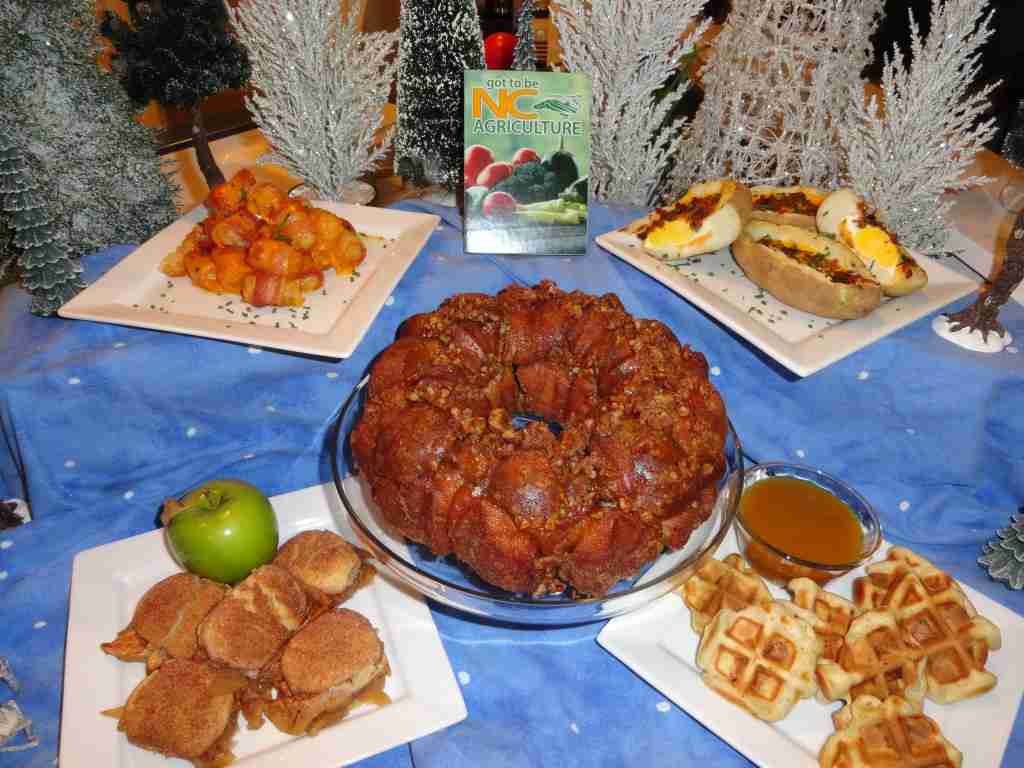 WRAL reporter Brian Shrader and our own Lisa Prince feature seasonal recipes in their weekly Local Dish Cooking segment. This month Brian and Lisa test out several recipes from Facebook. Check out the recipes to find out which one was named by Brian as “Best Local Dish Dessert Ever” and which recipe missed the mark.

The first recipe is for a satisfying breakfast perfectly cooked inside a potato. This recipe is from Tasty on Facebook. It calls for bacon bits but Lisa recommends one piece of bacon cooked and crumbled. She also suggest keeping the tops of the potato you cut off and the potato you scoop out and make a baked potato casserole. Also, salt and pepper the potato before adding the filling.

Pierce potato with a fork. Wrap one potato in a wet paper towel and microwave 4-6 minutes. Remove from microwave and let cool a bit. Cut off the top and scoop out the middle. Fill the hole with 1 Tbsp. shredded cheddar cheese, an egg, 1 Tbsp. cheddar cheese, bacon bits, and chives. Bake at 400 degrees for 15 to 20 minutes, or until egg is cooked to your preference.

The next recipe is for an ooey-gooey monkey bread made a little differently. This recipe is also from Tasty on Facebook. Lisa suggest substituting NC-grown pecans for the walnuts. Also, be sure to use a Bundt pan and the 16 oz. biscuits or the recipe won’t work.

Flatten out dough and fill with a piece of cream cheese and 3 to 4 morsels. Wrap dough around ingredients to form a ball. In a sealed bag, combine sugar and cinnamon then add the dough. Seal and shake to coat.

In a bowl, combine brown sugar and butter. Microwave for 70 seconds, stirring halfway though and whisk to combine.

Grease a Bundt pan (not a tube pan) with cooking spray. Sprinkle some pecans on the bottom; add 1/3 of the dough balls, and then glaze with butter and brown sugar mixture. Repeat layers until done.

Bake at 350 degrees for 30 to 35 minutes. Cool for 10 minutes. Put a plate on top of pan and flip to invert onto serving plate.

With the Super Bowl in just a few weeks, this quick and easy appetizer will disappear way before the half time show. Lisa suggest going ahead and making two batches. Serve with ranch or sour cream.

Roll tots in the bacon. One slice of bacon will wrap 3 tots. Place in foil lined 8×8-inch baking dish and bake at 400 degrees for 25 minutes. For extra crispy tots bake 30 minutes. Stack the tots and place cheese all over. Return pan to oven and bake an additional 5 minutes. Garnish with chives.

The next recipe earned quite an honor when Brian named it as the “best Local Dish dessert ever.” This recipe is from 12 Tomatoes on Facebook and Lisa’s favorite this month, too. She said instructions were the easiest to follow.

Heat oven to 350 degrees. In a large bowl, toss apples together with brown sugar and cinnamon.

Transfer them to a large, 9×13-inch baking dish and set aside. In a separate bowl, combine cake mix with unsalted butter and egg and mix until dough begins to form. Using your hands or a spoon, begin forming 1-inch balls and transfer them to a plate. In a shallow dish, whisk together 2 tablespoons sugar and 1 teaspoon cinnamon until thoroughly mixed. Roll each ball in sugar mixture until completely coated, and then place cookies evenly on top of apples. Place baking dish in oven and bake for 40-45 minutes, or until apples are tender and cookies are golden brown. Remove from oven and serve hot, garnished with vanilla ice cream.

This recipe wasn’t a favorite but Brian and Lisa have a few suggestions to give the dish more flavor.  Lisa suggested making the batter sweeter to have more flavor. Brian even suggested using curry to create a unique chicken and curry waffle bite.

Mix mustard, maple syrup and honey together in a small bowl, set aside. Prepare the chicken, season and set aside.

Waffles: Combine the wet ingredients in a mixing bowl. In another mixing bowl, sift together the dry ingredients. Add the wet to the dry and mix until smooth. Add the seasoned chicken to the waffle batter. Make sure the chicken is coated in the batter. Heat your waffle iron on the lowest setting. Spoon a piece of chicken and additional batter into each section. Cook on the lowest setting for about 7 to 10 minutes.