And it spreads: Laurel wilt found in Onslow County for first time

Laurel wilt is a devastating non-native disease of redbay trees and other plants in the laurel family in the southeastern U.S. Native to Southeast Asia, it was first detected near Savannah, Ga., in the early 2000s and has since spread to eight additional Southern states. It has already killed an estimated half a billion trees since its introduction to the U.S. 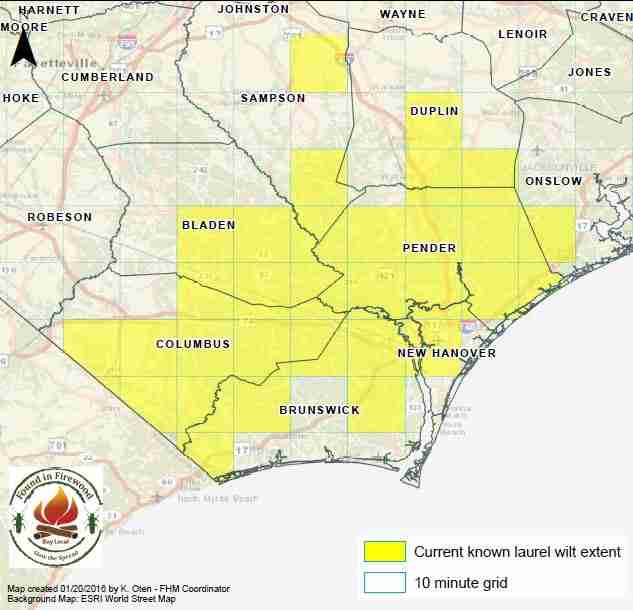 Laurel wilt was first found in North Carolina in 2011 in Bladen County. Each winter, the N.C. Forest Service conducts surveys to detect the range expansion of the disease within the state, if any. Last year (2015) was the first year since the initial detection of laurel wilt in the state that it was not found in a new county. Good things come to an end, though, and in this case, it came to an end in January. Earlier this month, laurel wilt was detected in Onslow County for the first time. Onslow is the eighth county in North Carolina in which this disease can be found.

The redbay ambrosia beetle is the primary vector responsible for spreading the disease pathogen from tree to tree. In addition, it is now suspected that other ambrosia beetles, some native, also play a role in infecting new trees. Another danger lies in the potential for long-range dispersal of the disease: The disease and its insect vectors can move maybe hundred of miles to new areas, hiding within infested wood. This is just one reason why the N.C. Forest Service encourages the use of local firewood!