North Carolina is well-known for its beautiful forests that cover a majority of the state. From being known as “the land of the pines” to being a favorite vacation spot for fall leaf season, our state is home to trees that not only beautify the state, but play a major roles in the livelihood of many N.C. residents. Each year, these forests are threatened by many insects and disease, several of which were active in 2015.

NATIVE PESTS
Most often, our forests are resilient and accustomed to native pests. Periodically, outbreaks can occur and damage can be widespread and conspicuous. In 2015, several outbreaks of native pests occurred that caused alarm. In the western part of the state, yellow-poplar weevil and oak leaf blister were major concerns. In both cases, landowners were encouraged to maintain tree vigor through proper tree care. A single year of foliage damage typically does not cause long-term effects to overall tree health.

In parts of central and eastern North Carolina, many landowners noticed increased activity from the Ips engraver beetle for the second year in a row. Ips engraver beetles are insects that attack pine trees weakened by other stress agents. The outbreaks seen in 2014 and 2015 could be the result of several factors such as damage from ice storms, high stand density, periods of excessive dryness or wetness, poor soil nutrition, etc. 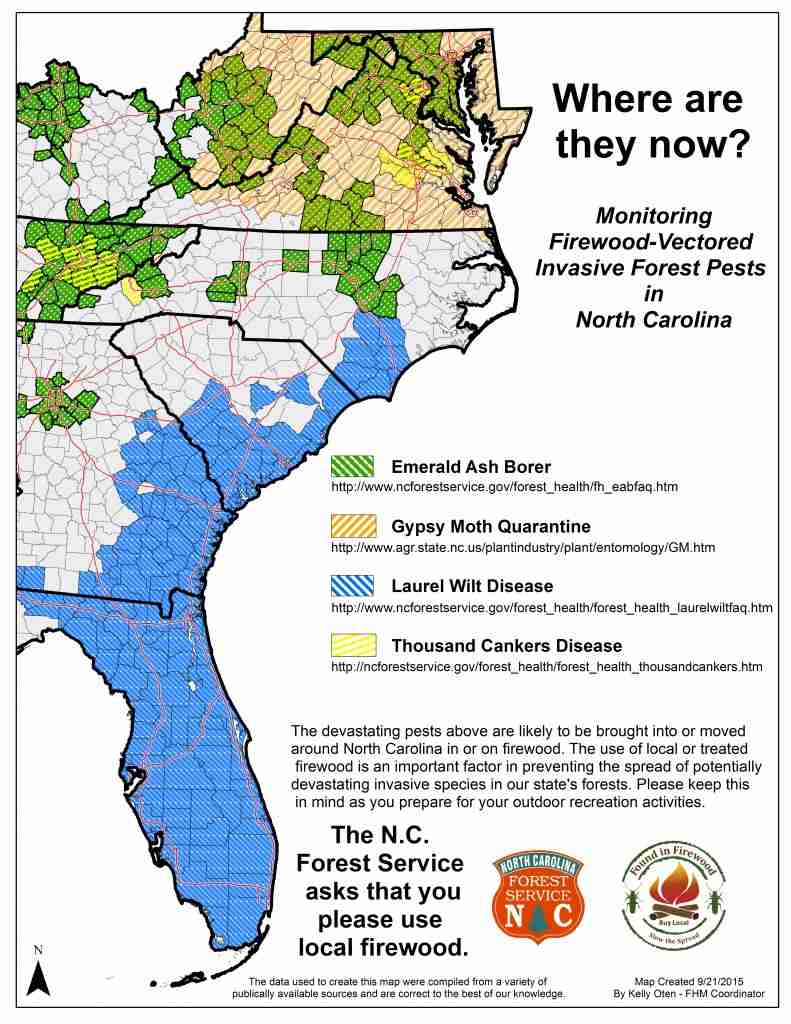 EXOTIC INVASIVE PESTS
Newly introduced pests, on the other hand, tend to have devastating impacts on our forests because trees typically lack appropriate defenses needed to cope with them. Since 2010, three non-native invasive species were detected for the first time in the state: laurel wilt (2011), thousand cankers disease of walnuts (2012), and emerald ash borer (2013). All three of these threats can be accelerated by the movement of firewood.

This year, laurel wilt was found for the first time in Duplin County, bringing the total number of counties affected in the state to seven. Statewide trapping efforts did not detect a thousand cankers disease in any additional counties this year. Haywood County remains the only county affected by that insect-vectored disease. When it comes to invasive species, however, it was emerald ash borer and gypsy moth that stole the show.

The emerald ash borer was detected in an impressive and unpredictable 14 additional counties in 2015, bringing the statewide total to 18. As a result, the entire state was quarantined for the insect. The N.C. Forest Service will continue to monitor for this insect in coming years. Homeowners and landowners are encouraged to treat or remove infested ash trees, but do not move potentially infested material offsite.

The gypsy moth was also found in higher numbers than the previous three years and treatments next spring will also be numerous. The entire state has been monitored for gypsy moth since 1982 through an effort of the Plant Industry Division. The 2015 trapping season is complete and 2,021 moths were captured in 915 traps. This is more than twice the number of moths captured in 2014. These trap captures, along with historical trap capture data from an area and egg mass surveys to be conducted this winter, will play a role in the determination of treatments that will be done in 2016. Treated areas in 2015 (based on 2014 trap catches) included 1,804 acres in northwest Warren County, 174 acres in western Rockingham County and 517 acres in northern Rockingham County. The gypsy moth has been held at bay from becoming established in North Carolina, with only two counties being quarantined for the pest since 1988 (Currituck County and parts of Dare County). These counties remain the only two with a gypsy moth quarantine in place.