Not just a hike in the woods; Plant Industry Division works to protect ginseng from poachers on public lands 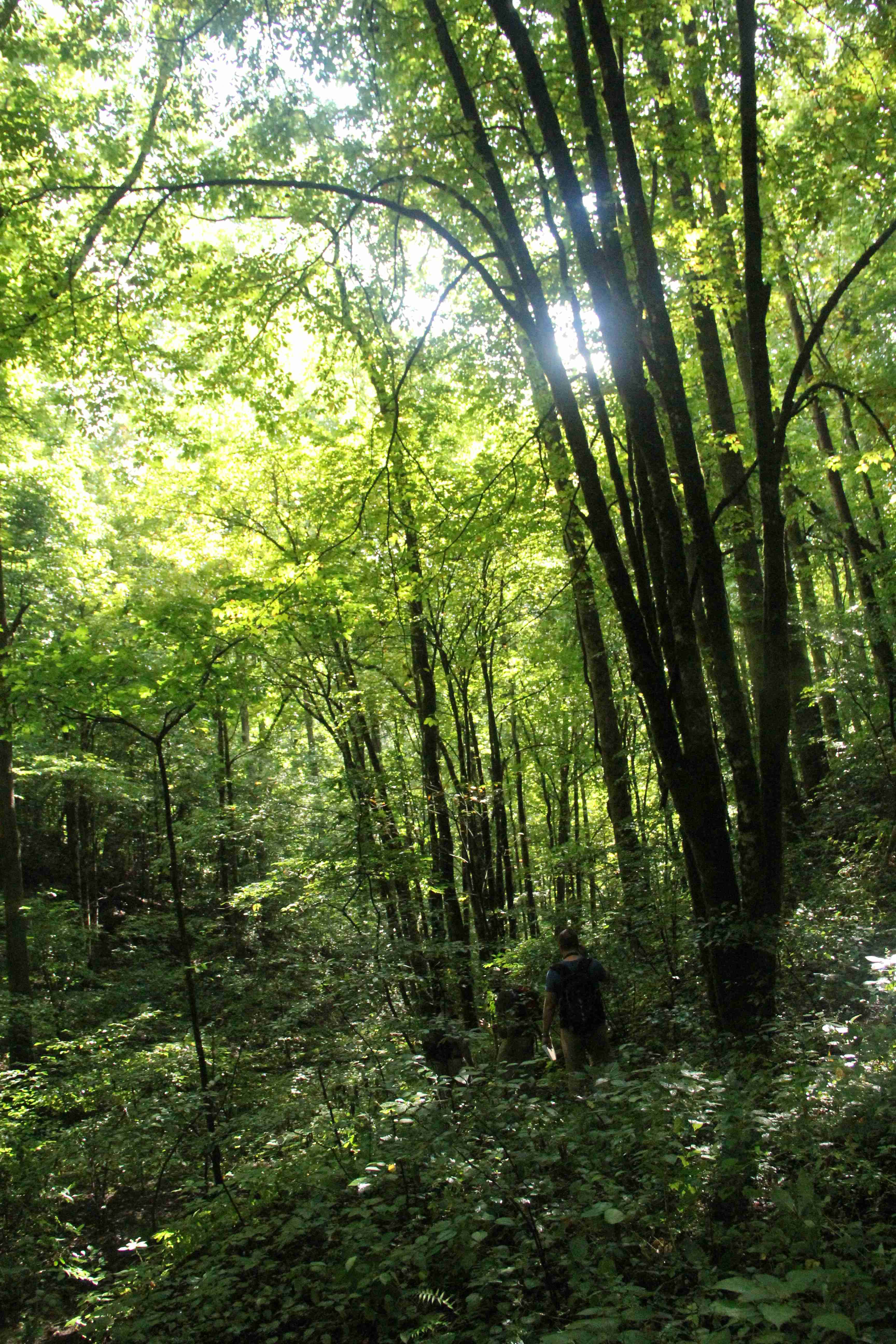 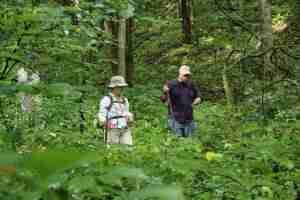 A man on a mission

For 22 years, Jim Corbin has scoured the rugged terrain of the Great Smoky Mountains National Park searching for wild ginseng. While this may sound like the introduction of a character on a reality television show about ginseng harvesters, it is not.
Corbin, a plant protection specialist with the N.C. Department of Agriculture and Consumer Services, isn’t looking to harvest the highly prized plant at all. Instead, he wants to find them and mark them with a silicon dye to discourage poachers looking to cash in on the park’s protected population of ginseng.
The National Park Service was created in 1916, “to conserve the scenery and the natural and historic objects and the wildlife therein and to provide for the enjoyment of the same in such manner and by such means as will leave them unimpaired for the enjoyment of future generations.” – From the National Park Service website
Poaching ginseng from federal lands runs counter to that mission.
Each year law enforcement rangers with the National Park Service seize between 500 and 1,000 illegally poached ginseng roots, according to a press release announcing the recent sentencing of a repeat poaching offender. Over the years, park biologists have marked and replanted over 15,000 roots seized by law enforcement.
Corbin developed the marking program from scratch, tinkering with mixtures on his own until he fine-tuned the best combination of materials that would absorb into the plant. Roots marked with the dye will glow a reddish-orange under a black light, indicating that the roots came from federal lands, Corbin said.
The dye can also transfer on to poachers’ hands and clothes when they come in contact with it, which can also help rangers in the field. 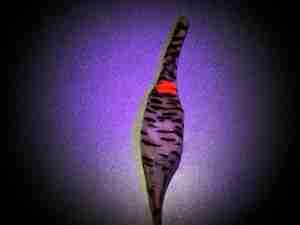 Illegal poaching has long been a problem on federal lands such as national parks in part because of the availability of the plant in the park, the vast amount of land involved and a limited number of human resources to patrol that land.
Current prices for wild ginseng range from $180 per pound for green to $450 per pound for dry, but it has been higher at $300 per pound for green and $850 per pound for dried in 2014. Those numbers provide plenty of incentive for poachers to try to find wild ginseng wherever they can. Corbin’s efforts give park rangers a tool to pursue legal action against illegal poachers, and it has been effectively used in court to prosecute cases of poaching.
Legally harvested ginseng is sold through licensed dealers in the state, often with yearly totals fluctuating with the prices paid per pound. Since 2004, the N.C. Plant Conservation Program kept numbers on annual ginseng harvest totals, with them ranging from 4,265 to 12,799 pounds dry weight. Since 2011, the number of harvesters selling to licensed dealers has increased nearly 60 percent to more than 16,700. For the 2015 season, which runs from Sept. 1 through Dec. 31, the program has licensed 45 dealers who are based mostly in the western third of the state. That represents a nearly 10 percent increase from previous years.
The total number of harvesters has seen a steady increase since 2011.

Every year, Corbin organizes a team of sharp-eyed plant specialists and volunteers to look for and mark plants. They typically head out before the September start of the harvest season, when plants are visible, blooming and easier to spot. This year’s group included a mix of seasoned ginseng markers and new plant specialists, male and female, younger and older. The group also included three park rangers.
With walking sticks in hand and backpacks secured, each day they headed into the woods to begin the search. On day three’s search, it quickly became obvious that trails were not going to be involved in much of the hike and that walking sticks were a necessity to keep you from sliding down steep and treacherous embankments.
The searchers fanned out across the rocky, leaf-covered terrain, eyes down, searching for the plant that sports red berries when in bloom. To a novice, the plants look a lot like others in the thick underbrush of low-growing greenery.
Not so for Corbin, who seemed to be able to spot the plants from hundreds of feet away. But, it wasn’t always that easy.
As a youth, Corbin said he had an uncle who dug ginseng, “but I couldn’t find it if I fell on it.”
Gradually that changed when he started working with the plant regularly. “It took about a year to get where I could see it from a distance,” he said. “You just develop an eye for it.”
Corbin clearly has developed an eye for the plant, and a passion for his work. The term “ginseng whisperer” comes to mind for his incredible ability to spot plants in the midst of a chaos of underbrush.
“Got one” and “There’s a couple over here,” could be heard as the workers soon began finding plants on their own.
When they find a plant, searchers carefully expose the root, spray it with glue and then dust the root with the distinctive orange-sherbet-colored dye. The glue holds the dye on the plant long enough for it to be absorbed. The root is then covered back up and the foliage nipped off at the ground, essentially protecting the plant for another year. 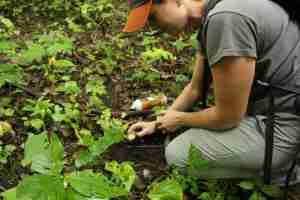 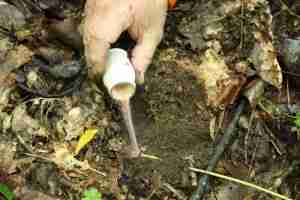 Applying the dry dye to the root of a ginseng plant.

This area, not far off a main road, is the type that Corbin intended to target this year. A spot with easy enough access that it has seen poaching activity. It was a calculated move that resulted in a record year for plant markings, 4,209 in total.
“We worked to mark areas that we could physically defend,” Corbin said. “We cut down the amount of area we covered to try to be more successful, and we tried to narrow it down by how poachers work.
“I have had to use a more scientific approach that gives me information on terrain. Some terrain is so rough that poachers don’t go into those areas,” he said.  “Basically with age, we have become smarter in our approach.”
That doesn’t mean the hiking was easy by any means. The first day, the team hiked 10 miles, followed by 12 miles the second day. The third day involved about five miles of hiking, which Corbin assured was much easier in comparison with the first two days.
“That first day, even the 30-year-olds were struggling,” he said.
Despite his assurances, and even with the beauty of nature to temper the physical demands of moving up and down steep terrain, it was still hard, dirty work. At the end of the day, every member of the team walked out of the woods soaked with sweat, clothes dirty from hip to hiking boots, dirt jammed under their fingernails and likely feeling a little itchy. The earlier pitfalls of hiking – such as falling down and disturbing a ground nest of yellow jackets, resulting in a volunteer getting stung multiple times – were avoided on day three. 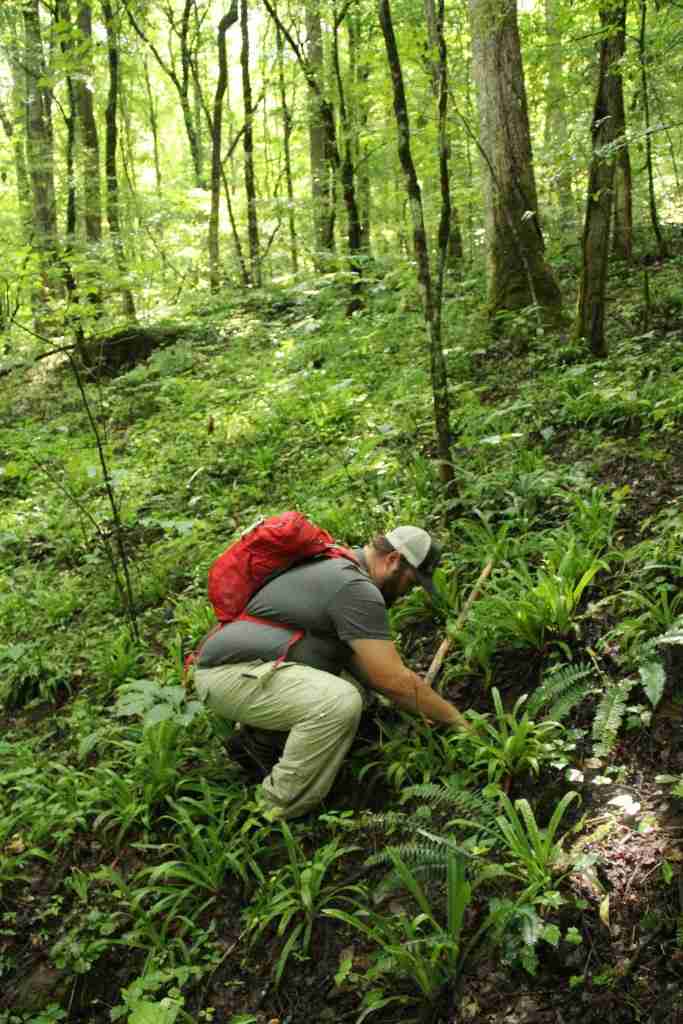 April Bauder, a plant protection specialist who covers Durham, Orange, Person and Wake counties, was marking ginseng for the first time and admitted being a bit nervous about the hiking.
“I didn’t know what to expect and I had heard stories about these long hikes in pretty rugged terrain,” she said. “We were in pretty rough terrain to begin with, but once you get in the woods, it’s just so beautiful everywhere you look as you are hiking, you just forget about that. Your head is down to the ground and you are just focusing on trying to spot these plants.
“All of your inhibitions about being clean and tidy go out the window. You are going to get dirty, you will fall, you will slide, but it is all OK,” Bauder added.
The more experienced searchers offered suggestions on finding the plant, which Bauder said was helpful.
“It’s kind of like looking for a needle in a haystack, there is so much Virginia creeper and other plants that at first look like ginseng, that it is hard,” she said. “They were like mentors telling you what to look for.”
Some of the veterans suggested looking near downed logs or the base of trees. If a plant was spotted on a hilly area, it was a decent bet that you might find a few plants above or below that one as the seeds likely shifted downhill after they fell off, said John Scott, a retired plant protection specialist who volunteered for this mission. Seeing certain plants in an area was another sign to look closely for ginseng.
While it is not illegal to harvest wild ginseng on private lands with permission or in national forests during the harvesting season with a permit, it is illegal to harvest the plant from state and federal parks. But that doesn’t stop people from illegally harvesting the plant which is prized, particularly in non-Western cultures, as an energy booster and for its medicinal qualities.
In August, a Bryson City man was sentenced to six months in jail for illegally possessing ginseng. It was his fifth conviction and followed a five-month prison stint, illustrating the challenges involved in protecting the park’s ginseng population in a region where the tradition and culture of harvesting runs deep.
Scott and David Brown, another volunteer, spotted an especially nice plant specimen on the way out of the woods. It was a four-pronged plant that stood about 18 inches tall. When they exposed the root, which was about a pinky finger wide, they knew they had found a mature plant, easily 8 years old or more.
After marking the root, Brown pinched off the tell-tale green foliage, leaving no trace of the plant behind. 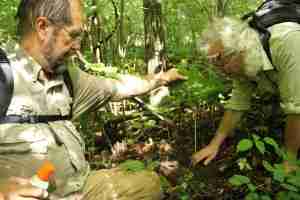 “You don’t find plants like that too often, especially not that close to a trail. That’s probably the oldest one we have found yet,” Scott said, clearly excited about the discovery.
Three continuous days of hiking in pursuit of wild ginseng plants had obviously forged a strong bond between team members.
During a lunch break in one of the few flat areas the group hiked to on day three, they recounted stories from the first two days, good naturedly picked on one another, offered up a pointed rock “chair” to one another to rest on, and shared a bag of cookies. 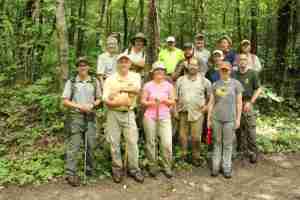 At the end of the day, when it came time to total up the week’s work, there was a sense of pride about what had been accomplished and a hope that the effort would ensure that future generations were able to enjoy these natural resources.
“I didn’t realize how many people poach ginseng,” Bauder said. “We want to be able to preserve the supply we have. I have children and when I see what we are doing in trying to protect this plant, I realize just how important this work is.”