These recipes tended to be seasonal with just a handful of ingredients. We thought these recipes needed to be shared in a new format. The Tar Heel Kitchen post will unearth a few of these timeless recipes each month. This week we are revisiting the April 15, 1971 issue and a timeless recipe for chicken slick or pastry.

“As yet no solution has been reached as to where the term “Chicken Slick” originated. One reader thought the term began in Louisburg, N.C.,” said York Kiker, former NCDA&CS home economist. “Another person indicated that “slick” was used for a dumpling with no baking powder. One friend opined “That thar’s a city dish – like a city slicker.” Regardless of the origin of the name, chicken pastry (or dumplings) needs to be rich and “slick” to be good.” 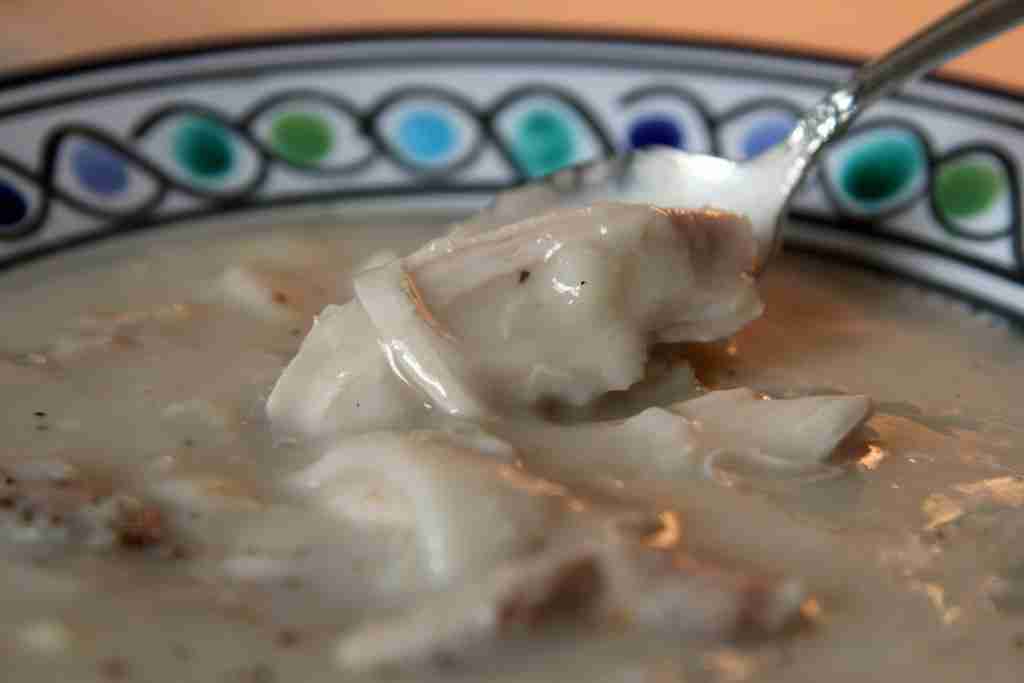 Chicken Slick or Pastry is a Southern Sunday dinner staple.

September is National Chicken Month and a perfect time to try your hand at a classic chicken dish. “Apparently this is a favorite food for many families. It is a wise choice, for North Carolina has an abundant supply of excellent poultry,” Kiker added. “It would be hard to feed the family a better or more reasonably priced main dish than “Chicken Slick.”

In large Dutch oven or pot, cover chicken with water, add salt and pepper to taste. Boil chicken gently until very tender and meat falls from bones. (Test kitchen tip: Don’t use too much water or your broth will be weak.)

Cut lard or shortening into flour. Add enough water, as hot as you can stand, to flour mixture and work to form firm dough. This requires some kneading to make smooth. Roll out dough very thin on floured surface. Cut dough into strips approximately 1-inch by 3-inch. Drop strips of pastry into pot with boiling broth and chicken. It is suggested that only one layer of pastry be put in at a time. Replace lid, cook pastry a few moments, stir, then add another layer of pastry until all pastry is used. Replace lid and continue cooking about 15 minutes until dumplings are done. You may prefer to take chicken from the pot before adding the pastry and remove the bones. Return chicken after the pastry has finished cooking.

We tried this recipe in our test kitchen and recommend making the recipe your own by adding some seasonings such as a dash of salt and pepper or celery salt. We also added a small onion. This recipe is good right off the stove, but it was even better as leftovers. A short cut would be to use ready-to-use dumplings, such as North Carolina’s own Anne’s Dumplings. To prove that every Southern family has a recipe that’s just a little different, check out this Local Dish segment where Lisa Prince shared her grandmother’s chicken and dumplings recipe.