Twelve North Carolina counties are now under a quarantine aimed at preventing the spread of emerald ash borer. 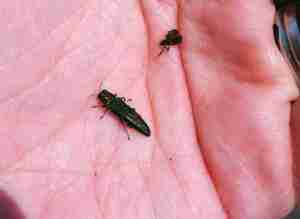 Since June, seven counties have been added to the quarantine, which restricts the movement of hardwood firewood, ash nursery stock and other ash materials. The latest counties under quarantine are Durham, Franklin, Graham, Johnston, Orange, Wake and Wilson. The borer was detected in Granville, Person, Vance and Warren counties in 2013, and it was found in Wayne County earlier this year.

Emerald ash borer is a devastating pest to ash trees, eventually killing the trees where the insects are found. The department is continuing to monitor other counties for this highly destructive pest through trapping and visual assessment of trees. Department personnel will be pulling traps in early August, and Commissioner Troxler says it’s possible they will find sites in even more counties.

Symptoms of emerald ash borer include a general decline in appearance. Clumps of shoots emerging from the trunk of the tree and increased woodpecker activity are other symptoms. The pest can affect any of the four types of ash trees grown in the state (green, pumpkin, white and Carolina).

Land owners are encouraged to report any symptoms in ash trees to the department’s Plant Industry Division at 1-800-206-9333.

Click on the audio player below to listen to Commissioner Troxler and Rhonda discuss the expanded quarantine for emerald ash borer.