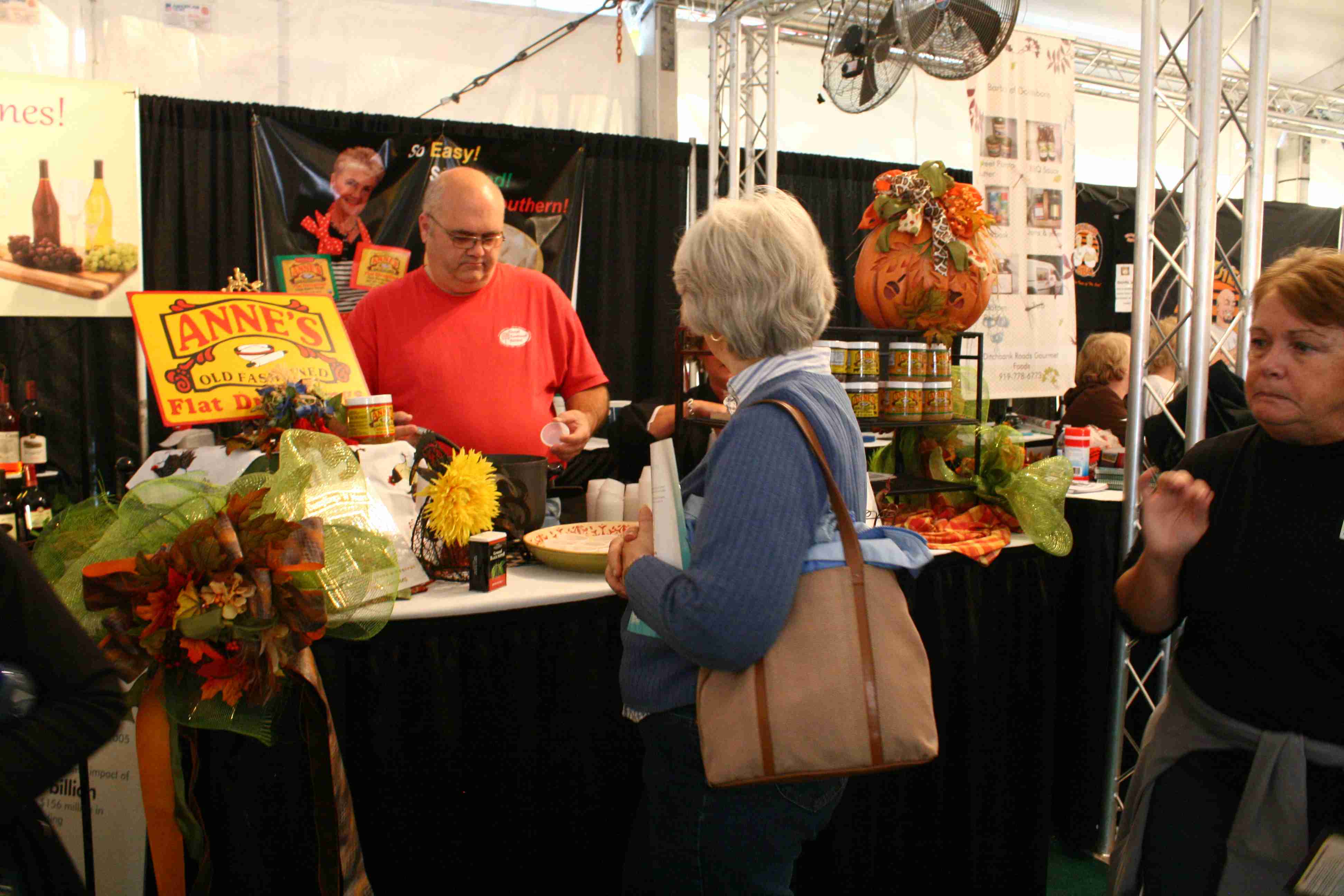 When Anne Grimes, her late husband Bryan Grimes Jr. and son, Bryan Grimes III, started Harvest Time Foods Inc. in 1981, it was in a converted carport at their home. Their first product was frozen dough strips called Anne’s Pastry, used to make the traditional Sunday dinner meal of chicken and pastry, also known as chicken and dumplings.

“There were originally just three of us and all the products were made by hand,” said Grimes. “Now there are 32 employees and the products are made using machines.” Harvest Times Foods no longer operates out of the carport either. In 1990 the company opened a larger facility on 40 acres in Ayden.

In 1985, Harvest Time and about a dozen other North Carolina companies joined a new marketing program called Goodness Grows in North Carolina, offered by the N.C. Department of Agriculture. This program was designed to be a long-term marketing program that identifies products made with raw materials grown in this state. The products were identified with the Goodness Grows in North Carolina logo, which includes the outline of the state with a tractor plowing fields from the coast to the mountains. Other early members of the program include Neese Sausage, Atkinson Milling, House-Autry, Steven’s Sausage and TW Garner.

“We were told about the program from a crab company in Wanchese,” said Grimes. “He told us that it was a program we needed to get involved with as well to promote our products.” In the early years of the program most of the shows to introduce grocery store buyers to N.C. products were out of state.

“We traveled to Alabama, Virginia, Tennessee and other states about four or five times a year,” said Grimes. “The shows helped us get contacts and showcase our products. Most buyers really don’t know all you can do with our product, so being able to sample at shows really helps.”

At the time, food producers also couldn’t connect directly with consumers through a website or Facebook. “You really had to attend shows to get face-to-face with buyers,” said Grimes. “The Department of Agriculture was a big help with that.

“Now we do yearly Flavor of Carolina Shows in Charlotte and Raleigh and the buyers come to them,” she said. “Belonging to this program gives you an edge.”

Currently, Harvest Times Food products are available in 28 states, online and through military contracts. Grimes, 73, also uses Facebook, her website and the “Cooking with Anne” YouTube videos to connect with potential consumers. In addition, special events such as the Food Expo at the Got to Be NC Festival or N.C. State Fair allow company employees to interact directly with consumers.

This month marks the 30th anniversary for the Goodness Grows in North Carolina program, which now supports about 3,000 members. The program has earned a reputation for being not only one of the first programs of its type, but the best, too. “I am proud of our state and what the Department of Agriculture has done over the years to grow agriculture and food production in our state,” said Grimes.

Goodness Grows in North Carolina still supports its members with marketing assistance and trade show opportunities that connect them with buyers. Ten years ago, the Got to Be NC campaign started as an extension of the ongoing Goodness Grows program to raise consumer awareness of agricultural products grown, raised, caught or made in North Carolina.

“We started the Got to Be NC program before buying local was cool,” said Agriculture Commissioner Steve Troxler. “Now, we are fortunate that everyone seems to want to have a stronger connection to their food, and our farmers, ranchers, fishermen and food businesses are benefiting.”

The Got to Be N.C. logo incorporates the GGINC logo and is proudly displayed at restaurants, grocery stores, roadside stands and even farms across the state. “Restaurants in particular have embraced Got to Be NC,” said Troxler. “We support them with menu contests such as Dig into Local and the annual Got to Be NC Competition Dining Series.”

For Grimes, it’s still the Flavors of Carolina shows that offer the biggest help for her business, especially as the company expands to include gluten-free products. “Food transitions and tastes change,” said Grimes. “We have to change with the next generation. Even if they eat chicken pastry now when they visit mom or grandma, what are they going to do when mom or grandma are gone – are they still going to make it?”

Grimes sees the pastry side of her business becoming more of a niche market and the expanding gluten-free line having international potential. At shows and at a bakery at the Ayden facility, she offers samples of the gluten-free line. “We are working on packaging now and should soon start selling online and in a few organic stores. We are working towards building capacity for grocery stores,” said Grimes. “But buyers will already know they are good.”