A trip to Duke Homestead: a lesson in tobacco’s legacy

Having lived in Durham my whole life, I’ve always been aware of how integral tobacco was to the city’s growth and development. But, until last week, I had never explored Duke Homestead to see where it all began. 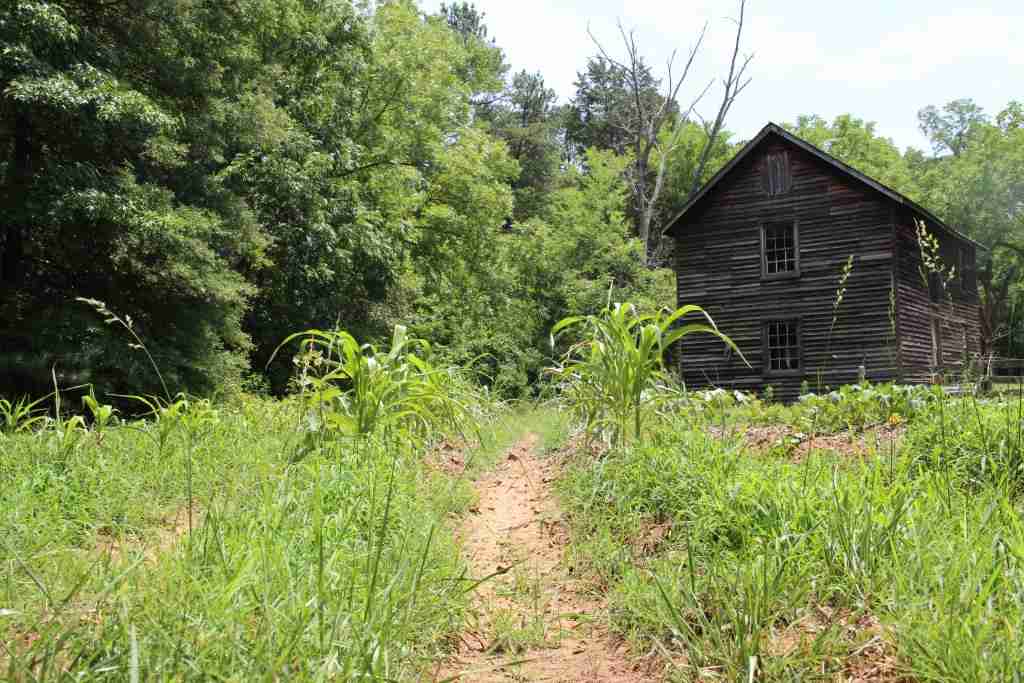 A tobacco farm sits outside the largest of three smoking-tobacco processing factories on Duke Homestead, known as the Third Factory.

In the late 19th century, Durham was the backdrop for the biggest tobacco company in the world — the American Tobacco Co. As it became the dominant tobacco powerhouse, the company brought millions of dollars back to the state and its citizens. Although cigarettes are no longer manufactured in Durham, you see the remnants of one of American history’s greatest entrepreneurial successes all over the city. You can see the legacy in the iconic Lucky Strike Tower in downtown’s American Tobacco District. You can see it at East Campus of Duke University, one of the nation’s top universities. And, you can see it at Duke Homestead.

Although an urban center of the state today, Durham is at the heart of much of North Carolina’s agricultural success. While Durham has grown into an urban city, agriculture remains our state’s top industry. North Carolina remains one of the top agricultural states. The state is ranked No. 1 in the U.S. for the production of tobacco, and one might say that this is largely due to the legacy left behind by Washington Duke and his homestead.

Washington Duke
In the 1850s, the positive publicity surrounding the cultivation of tobacco encouraged many North Carolina farmers to start producing the cash crop. Washington Duke, an Orange County farmer, began producing the crop after the failure of his cotton crop. Acquiring land in 1847 from the estate of his father-in-law, Duke continued to purchase property until he had accumulated the more than 300 acres that is now referred to as Duke Homestead.

After a brief stint with the Confederate Army during the Civil War, Duke returned to his home where he discovered the popularity of bright leaf tobacco among Union soldiers. With his children, Duke built a small smoking-tobacco processing factory. Duke’s product became increasingly popular and his homestead eventually grew to house three factories. In 1874, the Duke family began mechanical mass production of cigarettes. Much of the profits earned from cigarette sales were invested in land, industry and other causes. The Duke family contributed a $300,000 endowment (more than $7 million today) to Trinity College, which later became Duke University.

Tobacco Process
Before taking a tour of the homestead, I wasn’t very aware of the process involved in producing and manufacturing tobacco. I thought: you plant it, you harvest it, you roll it up and you sell it. I learned that the process is a lot more detailed and involved. 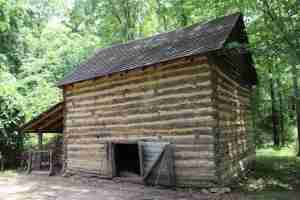 Harvested tobacco was arranged on sticks and flue-cured in curing barns before it could be consumed.

Before the advent of modern technology, the process of growing, harvesting and processing tobacco for market was a year-round labor. Before 1950, it took more than 900 man-hours of work to cultivate one acre of the crop, largely due to the fact that the work was done by hand.

The first couple months of the year were spent tilling, fertilizing and preparing the farm’s seedbeds and fields, before eventually planting the tobacco seeds in the seedbeds. By the early spring, the seedlings matured and were ready to be moved from the seedbeds to the fields. By late summer, tobacco harvesting began and the leaves were taken to the curing barns, where they were cured until they turned a golden color — hence the term “Bright Leaf tobacco.” Once the tobacco was cured, farmers would take the plants to the packhouse to be graded and bundled. By late fall, the tobacco “hands” were pressed flat and ready to be transported to tobacco auction markets and, in later years, tobacco warehouses and factories. 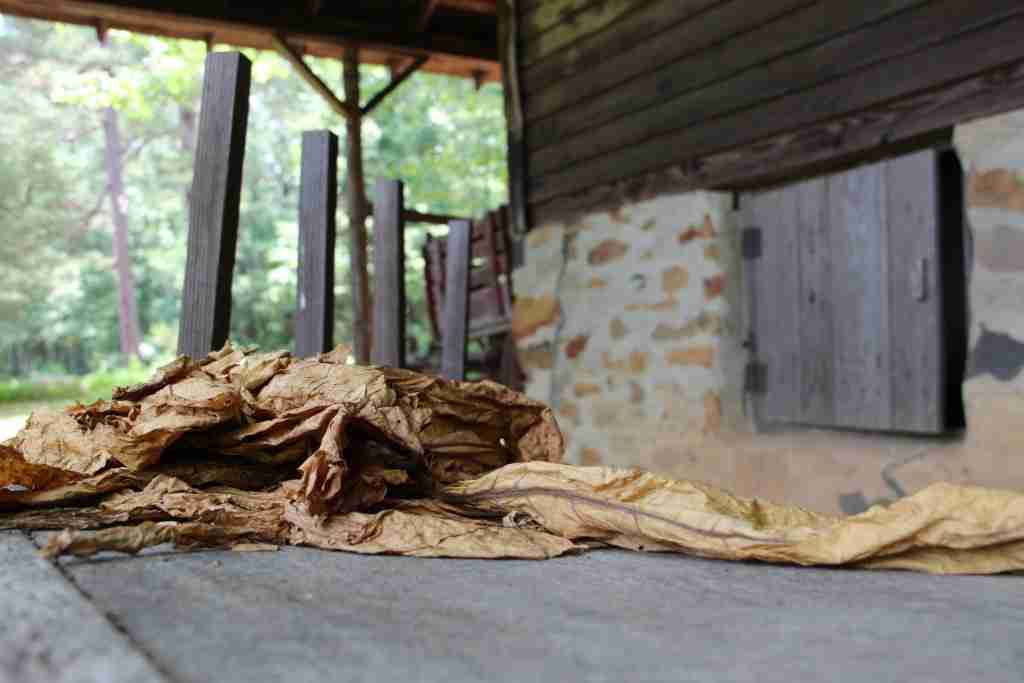 North Carolina farmers stored newly cured tobacco in packhouses after the plant was graded and prepared for auction. 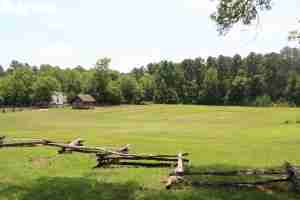 A view of some of the fields on the Duke Homestead property.

The Duke Homestead historic site and museum is a must-see for anyone interested in North Carolina history, business and agriculture. You’ll get to see the original buildings, see visual examples of how tobacco is cultivated and processed and see artifacts ranging from old advertisements and pictures pertaining to the growth of the tobacco industry. The property is beautiful and quite expansive, so there’s room for a nice hike and picnic as well.

One of the highlights of the tour was the visit to the different buildings on the property. I was surprised how simple the living quarters and manufacturing facilities were. Even though the buildings have been rehabilitated to mimic what they would have looked like in the 1800s, it was interesting to see how modest the estate of such a powerful and wealthy family was. While touring the Duke House, our tour guide would point to basic things such as a closet and a toothbrush and call them symbols of the Duke family’s wealth. I guess these observations are just testaments to how much times, and definitions of wealth have changed. However, my reaction was, “Really? A closet?” 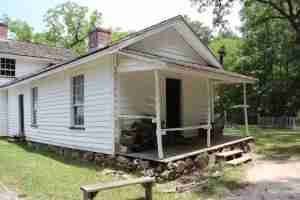 The “Duke House” was home to the Duke family and consisted of a kitchen, dining room, living room, a bathroom and two bedrooms.

Another interesting aspect of the tour was getting to go inside the factories and hear about how much work was involved in producing the tobacco. There was a division of labor on the farm. Everyone had their own responsibilities: the men were responsible for harvesting and curing the tobacco, and the women and children would bundle and press it. It’s fascinating to think about how much tobacco dominated the lives of the people who produced it. There were farmers sleeping outside the curing barn to ensure that nothing went awry. Tobacco farmers probably didn’t eat tobacco but they definitely slept and breathed it. I guess, not having grown up around farms, I find it hard to imagine a life revolving around agriculture.

Tobacco has always been an important part of North Carolina’s economy and is still an important crop for the state today. I think it’s great that our state has preserved this part of the history of the crop, not only as a way to observe a historic success story, but to commemorate the importance of agriculture to the state.

Even though tobacco may not be North Carolina’s leading commodity today, Washington Duke’s work with the crop provides great insight into how agriculture can affect change and progress within the state financially, industrially and socially.