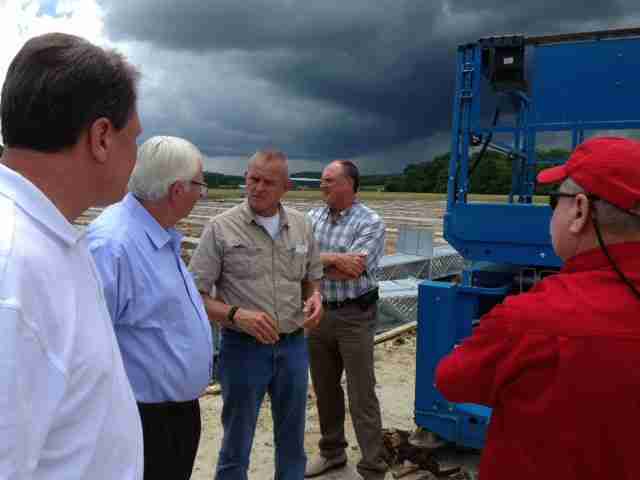 Agriculture Commissioner Steve Troxler, second from left, gets an update on construction of the Tri-Hishtil facility in Mills River.

Tri-Hishtil is a multinational partnership formed by the U.S. company TriEst, Israel-based Hishtil and SIS/Centro SEIA of Italy. The company will specialize in grafting, which is the practice of connecting the vascular tissue of one plant to another to improve resistance to diseases and pests. 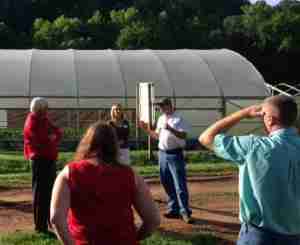 In Cherokee County, the Commissioner met with Sheriff Derrick Palmer, county Commissioner Cal Stiles and other officials at the county detention center’s farm. They looked at two high tunnels where fresh fruits and vegetables are being grown for use at the center. The tunnels were purchased with assistance from the TVA Ag and Forestry Fund, a program established with a portion of the funds from North Carolina’s settlement agreement with the Tennessee Valley Authority.

An interesting fact about the tunnels: They are on tracks, so they can be moved to new locations and soil on the farm.

In addition to support from the TVA funds, the USDA’s Natural Resources Conservation Service has assisted with the purchase of 97 high tunnels in Western North Carolina.

“In the mountains there’s a lot of interest in high tunnel production of fresh fruits and vegetables,” Troxler said. “These tunnels can protect high-value crops from low temperatures and even help extend growing seasons.” 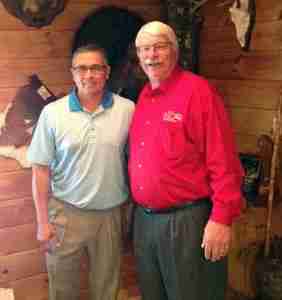 Michell Hicks, principal chief of the Eastern Band of Cherokee, and Commissioner Troxler

Commissioner Troxler also met with Michell Hicks, principal chief of the Eastern Band of Cherokee. The chief briefed the Commissioner on a feral swine monitoring program that the University of Tennessee has undertaken on tribal land and in the Great Smoky Mountains National Park. The NCDA&CS is interested in partnering with the tribe, National Park Service and university to expand monitoring for feral swine in North Carolina.

“Feral swine can have an impact on just about every aspect of a farming operation,” Troxler said. “They damage crops, fields, wildlife habitat, game lands and streams. Nationally, they rank behind only coyotes as the top predator of sheep and goats.”