Biology of the beautiful: Sphinx moths

I was working at Bass Lake Park in Holly Springs when I had my first encounter with a sphinx moth, also known as a hawk moth. It was hovering and humming near a native shrub in bloom, and it tricked me into thinking it was a hummingbird. It hovered and darted side-to-side.

Not all sphinx moths look like hummingbirds. Generally, sphinx moths have beautiful, colorful patterns, up to foot-long proboscises (straw-like mouthparts), large bodies (some are among the largest moth species that exist, with wings spanning up to eight inches), and relatively narrow wings. They can fly quickly, with rapidly beating wings, and even backwards briefly, confusing the matter even more.

They even feed similarly to hummingbirds, as well as the type of flowers they feed on: long, tubular shapes housing nectar. They need this nectar to fuel their energetic flight. Some sphinx moth species (like the hummingbird and bumblebee moths) are also active during the daytime, unlike many of their moth cousins. Of course, hummingbirds and sphinx moths are very different animals, so the explanation for their uncanny similarities is convergent evolution, or when two species independently evolve similar characteristics. Their wings appear more streamlined and aerodynamic than typical moth wings, as though they are the sporty model of moth. Indeed, they can get up to flying speeds (12 mph) that might be considered breakneck for the average insect.

The larvae are not as harmless. They have a characteristic ‘horn’ at the tip of their abdomen, and are often considered pests of tomatoes and tobacco (tomato hornworm and tobacco hornworm, respectively). As relatively large defoliators, they consume a lot of plant material, making the damage quite visible, however, not enough to warrant concern. There are many natural enemies (e.g., birds, parasitoids wasps) that keep populations relatively low. In smaller gardens, hand removal is an easy control method. When they grow up, adults sphinx moths are pollinators.  In fact, there are rare plants in the southwest and Mexico (e.g., datura) that they specialize in.

Several more fascinating facts about sphinx moths: There are about 1,450 species in the Sphingidae family, most of them located in the tropics. Females can lay 1,000 eggs on leaves. The eggs take several days to hatch, and the larvae take several weeks to grow to full size. Larvae pupate in the soil, and this process, depending on the species, can take anywhere from several weeks to an entire season. Interestingly, in adults, some species lack scales on part of their wings, giving that part of the wing a clear appearance. These species’ common name often includes the word “clearwing.” 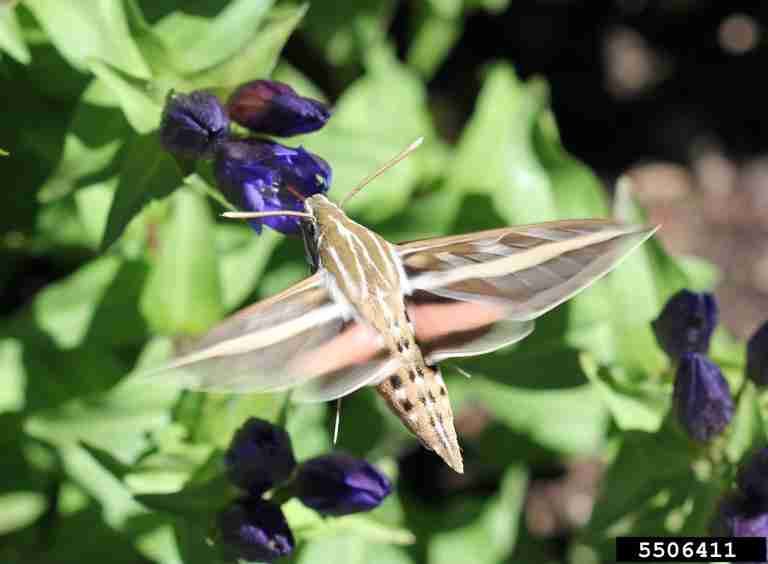