In honor of beer month, we looked through the archives of Local Dish to find a recipe that calls for beer. The recipe we found calls for two bottles of dark beer. We then asked around for a few North Carolina dark beer recommendations that would work well in the recipe. A list of suggested N.C. beers is below, but if you have other suggestions, offer them in the comments: 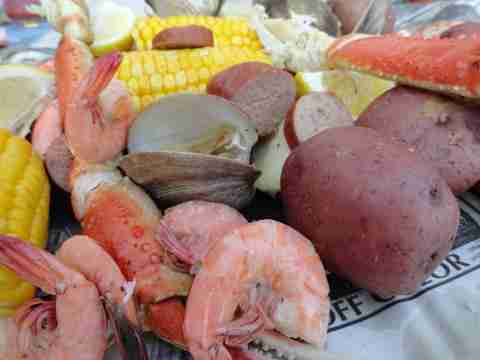 This Local Dish recipe can be adapted to whatever North Carolina seafood is in season. Lisa Prince suggests adding mussels and to just “pour out the stew on a table covered in newspaper and dig in, making sure to supply plenty of napkins.” This dish is also referred to as Low Country Boil.

Fill a large pot ¾ full with water; add beer and Old Bay seasoning and bring to a boil. Add potatoes and let boil for 10 minutes. Then add the crab clusters and corn, let them boil for 5 minutes. Add the polska kielbasa and clams and wait 5 more minutes until you finally add the shrimp. Let it all simmer together for 3-5 minutes longer or until the shrimp are pink.