The emerald ash borer is on the move once again, and this time it has made quite a leap. Last month, the tree-killing, invasive insect was detected for the first time in Wayne County, 73 miles from the nearest known infestation in Vance County.

An observant staff member at the Cherry Research Farm in Goldsboro noticed signs of the beetle in a 2.5-acre ash stand at the farm and notified the NCDA&CS Plant Industry Division. 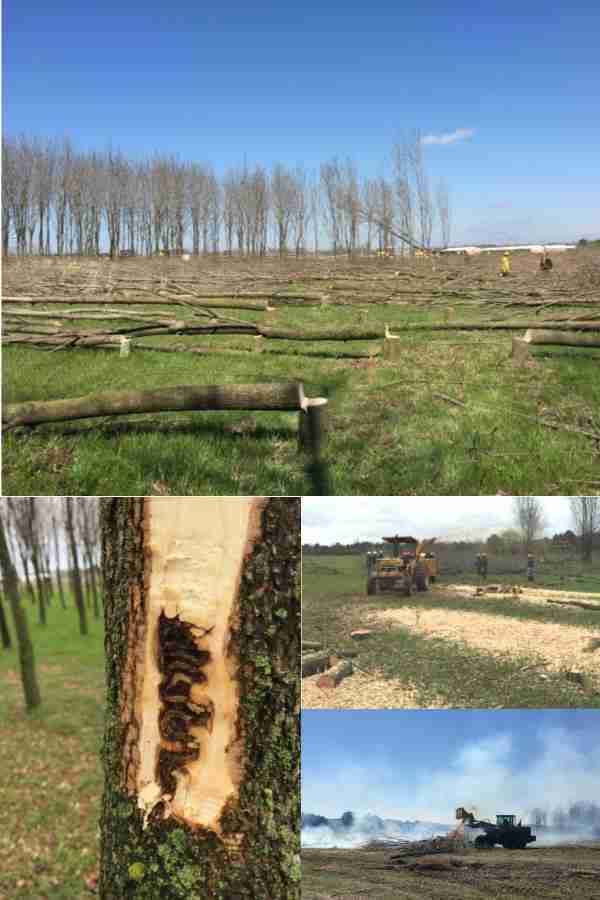 Top: An infested plantation of green ash in Wayne County was cut after emerald ash borer was detected there. Bottom left: Signs of the emerald ash borer (in this case, larval galleries) were evident in many trees within the stand. Bottom right: In order to destroy the tress, they were either chipped (top) or burned (bottom). Cut trees still pose a risk if beetles emerge and seek nearby, living trees. Images: K. Oten, NCFS.

Following official confirmation of the emerald ash borer, Wayne County was added to the list of counties under quarantine for EAB. The quarantine limits the movement of ash material and hardwood firewood. All hardwood firewood and plant parts of the ash tree — including living, dead, cut or fallen green lumber, stumps, roots, branches and composted and non-composted chips — cannot be moved outside the county. Wayne County joins Granville, Person, Vance and Warren counties, which were quarantined in 2013 when emerald ash borer was first detected in the state.

When camping anywhere in the state, the N.C. Forest Service advises using local or treated firewood to prevent the spread of potentially devastating invasive species, including the emerald ash borer and others to our state’s forests. The agency also advise to leave any leftover wood behind unless you are camping in the same county where you live.

The N.C. Forest Service and the Plant Industry Division continue to monitor the spread of this insect. Wayne County residents, particularly those with ash trees, are encouraged to watch for any signs of dead or dying ash trees. If you believe you have spotted an infested tree, you can report it by calling 1-800-206-9333 or by emailing at newpest@ncagr.gov.

The adult emerald ash borer emerges in late spring, so residents might see crown dieback on trees, D-shaped emergence holes, split bark and S-shaped larval patterns that are signs of the presence of emerald ash borers.

At the research farm, the N.C. Forest Service, the Research Stations Division and the Plant Industry Division worked cooperatively to destroy the infested ash stand, pre-emptively cutting, and chipping or burning, trees that were destined to die in a few years.

The N.C. Forest Service, and the Plant Industry and Research Stations divisions surveyed nearby, naturally growing ash trees and did not detect additional infestations. Additional surveys and trapping will be conducted this spring and summer.