In celebration of Small Farms Week, we are highlighting tilapia fish farmer Valee Taylor, who owns and operates Taylor Fish Farm in Cedar Grove. Taylor is a fourth-generation farmer whose family transitioned from tobacco to fish production. Small Farms Week runs through March 29. 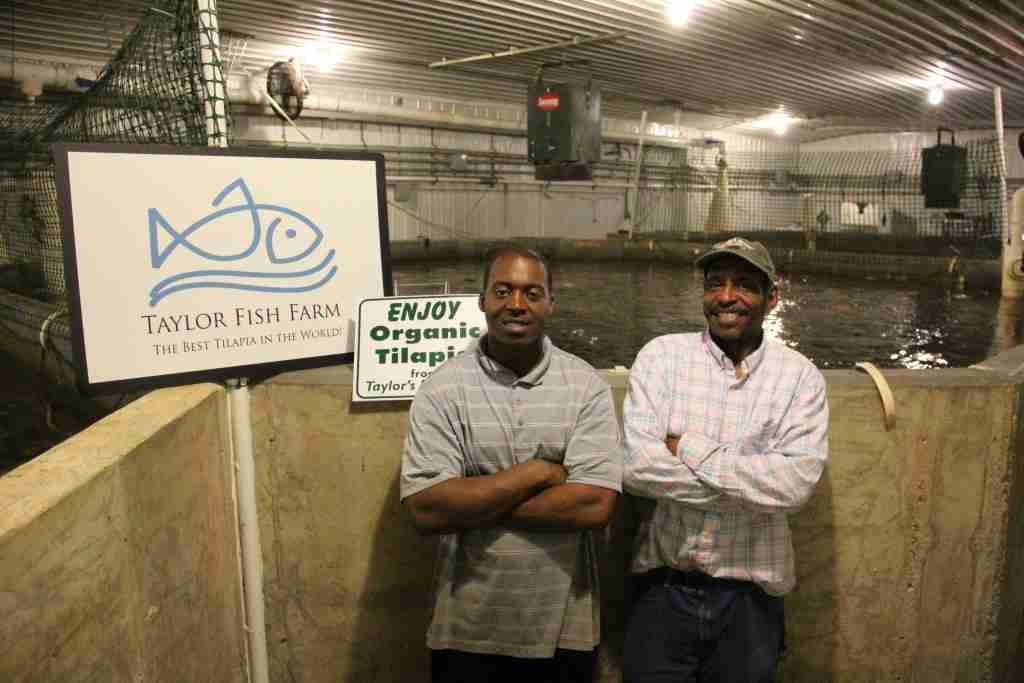 When Valee Taylor walks into the office of the fish farm he owns with his sister, Renee Stewart, he sees a future for his family. With fresh fish now in Whole Foods, some Publix stores, a number of Asian markets and in restaurants and other retail outlets in North Carolina, Canada and New York, Taylor Fish Farm seems well on its way to laying a solid foundation for the future.

When a career-ending accident forced Valee Taylor to leave his job with the state corrections department, he faced a crossroads as he struggled to regain his health. His family was initially told he likely would not survive the accident, but he did.

The experience changed him. “You look at things very differently,” Taylor said. “I have an idea of what we want this parcel of land to be. And we want to help keep our community together.”

To help with his recovery, Taylor’s doctor asked him what he liked to do before the accident. Gardening and fishing were two of his favorite hobbies, but the accident wouldn’t allow him to cast a line, so fishing wouldn’t work.

The doctor suggested he plant a small garden outside the door of his home, so he could work in it a little every day, slowly building strength as he went along.

Through his efforts he was able to share food from that garden with friends, family and neighbors. And with that, he discovered a new focus in life – feeding others.

Following the tobacco buyout, the fourth-generation tobacco family was looking for something to transition to. The main priorities for the new farm venture were to find something that would protect the land of his ancestors and also provide for the family.

Taylor knew that whatever direction the farm took, it needed to involve computers or some other technology if it was going to be of interest to the kids in the family.
“I wanted something that would be sustainable for my family. I saw fish farming as a business for the future,” Taylor said.

So Taylor set out to learn everything he could about building and operating an aquaculture operation through faculty and staff at N.C. State University and the N.C. Cooperative Extension Service.
He sought out Dr. Tom Losordo and Dennis Delong, two top experts on recirculating systems for aquaculture production.

“I went to them and said, ‘I want to work with you for free,’” Taylor said. “I just wanted to learn everything I could about it, and they were the people with the information.”

When he felt ready with his new-found knowledge and with design and engineering support from N.C. Cooperative Extension and NCSU’s Department of Biological and Agricultural Engineering, he began the process of building the facility from the ground up, complete with a filtration system that is a copy of a municipal wastewater treatment plant in South Carolina, only on a much smaller scale.

Now, the operation marks nearly seven years in operation, with a growing customer base and an eye on ways to grow the business in the future. The operation is housed in a metal building on the farm just down the road from the Anathoth Community Garden, which sits on land donated by his parents.

Like the Taylor family, the Anathoth Community Garden is firmly rooted in the community. During the growing season, the 5-acre garden provides fresh fruits and vegetables to 85 people a week along with offering internships for students to learn more about agricultural production, something that Taylor is extremely proud of. The garden brings people together, strengthening the community and providing for a variety of needs beyond just food, he said. There is a play area for children, a meditative space near a stream on the property and a community center with picnic tables, an open deck and an outdoor brick oven where bread is baked and broken.

Taylor is as proud to offer a tour of the gardens as he is the fish operation that includes six 25,000-gallon tanks housing tilapia in various stages of growth, from fingerlings to harvestable fish. Pumps keep the water moving, and the filtration system just off the main room with the tanks, filters out waste and uneaten food, keeping the water clean. 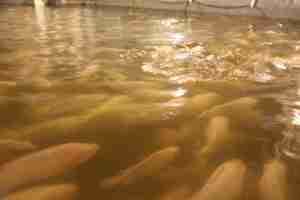 Feeding time draws the tilapia to the top of the tanks. The fish are fed an organic soybean-based diet. 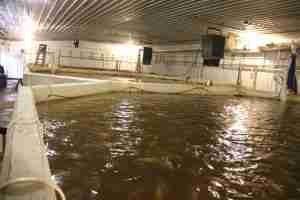 The fish generally take six to nine months to reach a harvestable size. Incoming fish remain in quarantine for six weeks, before moving on to the nursery tank for another six weeks.

The overall operation is impressive, from the nearly odor-free operation to its Institute of Marketology certification. Taylor Fish Farm is one of only two tilapia operations in the United States to earn this certification.

Along the way, Taylor also sought the advice of the N.C. Department of Agriculture and Consumer Services’ Small Farms Program. Through his first contact with the department, he was guided to other programs and resources that have helped him with his small farm.

Taylor said marketing assistance from the department has helped open doors for him that he likely would not have been able to access on his own. “The thing I like about the N.C. Department of Agriculture is that their people will come out and visit you, and talk to you to see what you have going on or see what you want to do, to see how they may be able to help you,” he said. “If you work with NCDA&CS you can take your business to places you would never think you could.”

Keeping the farm in the family is something Taylor and his sister have focused on from the beginning. All of the siblings’ children have worked or continue to work at the farm, some between school breaks and others on a more permanent basis.

Taylor’s son Jeremy has taken on significant responsibilities on the farm. 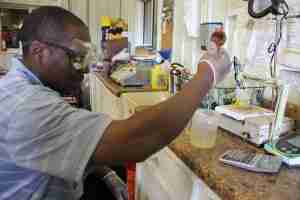 Jeremy Taylor tests the water from the fish tanks.

He monitors and tests water temperature and quality, checking ammonia, nitrates, pH and oxygen levels at regular intervals to ensure safe operation. Jeremy also is involved in formulating feed to keep the fish growing at a steady rate, harvesting fish and helping load fish for customers.

Valee Taylor has big dreams for his farm. He wants to add a processing facility to be more vertically integrated and to be able to offer jobs in the community. He is also interested in the world market, talking aloud about the possibility of shipping fresh fish to China and one day supplying fish to the military.

He acknowledges his business is still in its infancy in terms of the mainstream markets, but he believes he will continue to grow his business as more people try his product.

Taylor’s fish draw high marks on taste from customers, something he credits to the filtration system, good feed and good production practices. “We came in No. 1 in taste in Whole Foods,” Valee Taylor said. “The American consumer is getting more educated about their food. We are giving people a choice in terms of locally raised fish.”