When you think of the “most destructive pest in the South,” you may not envision a beetle the size of a grain of rice. But that’s how big it is. The Southern pine beetle is considered the worst of the worst when it comes to forest insects. During attack, pine needles fade from green to yellow to red, then dead. When an outbreak occurs, the beetles attack tree after tree, causing large patches of dead pines, called “spots.” In the past several years, the Southern pine beetle has caused an estimated $1.5 billion in damages [Forest Health Technology Enterprise Team report 2014].

Historically, the Southern pine beetle has kept it local, killing trees in Southeastern states north to Virginia. However, in the past several years, New Jersey became its newest victim, and just last year, several outbreaks were found on Long Island, N.Y. Many fear it will continue its range expansions similar to the mountain pine beetle, killing pines as it goes. 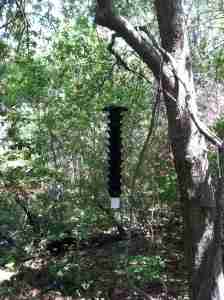 Funnel traps are used to trap Southern pine beetle each spring. By analyzing the trap captures, we can predict what the population levels may be like for the coming year. Image: K. Oten, NCFS.

Some might argue that we are due for an outbreak, as there has not been a Southern pine beetle outbreak in North Carolina since the early 2000s. Since then, beetle activity has been low and no spots have been reported.

On the other hand, North Carolina is known for topnotch forest management practices – practices that include Southern pine beetle outbreak prevention. Overstocked pine stands are more susceptible to beetle attack and through thinning, one can reduce the likelihood that an outbreak will occur. The Southern Pine Beetle Prevention Program is a cost-share program that aids landowners in thinning pine stands.

Either way, we will have a good idea what to expect this year soon. The N.C. Forest Service traps for the Southern pine beetle each year to predict what the forthcoming population levels will likely be. Stay tuned for trapping results later this spring.