In the Kitchen with Brian and Lisa: February Recipe Roundup 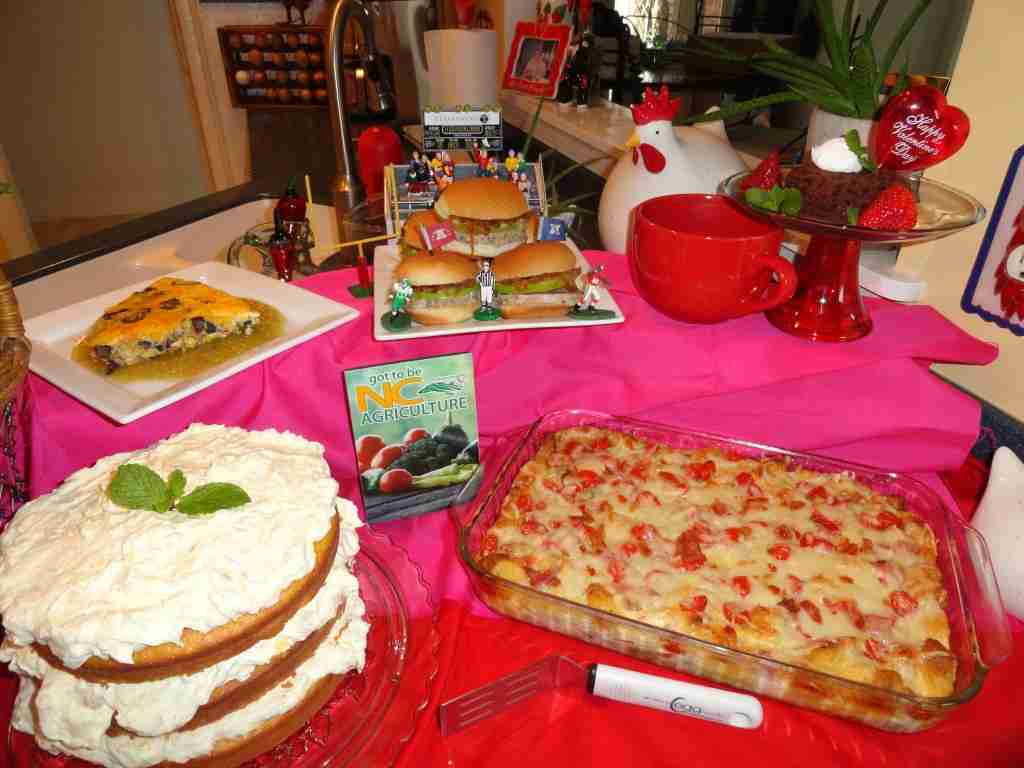 WRAL reporter Brian Shrader and our own Lisa Prince feature seasonal recipes in their weekly Got to Be Good Cookin’ segment using local ingredients. This month’s recipes feature fresh and delicious N.C. eggs plus a bonus Super Bowl Sunday-inspired recipe for pork sliders. According to the N.C. Egg Association, North Carolinians consume about 2 billion eggs each year.

The first recipe is a blue-ribbon winning recipe from the N.C. State Fair for pork sliders that would make a great addition to a Super Bowl party or any get together.  Julia Truelove of Raleigh won first place in the Tar Heel Pork Challenge with this recipe.

In a gallon-sized zip lock bag, mix brown sugar, mustard, garlic, olive oil and vinegar. Season the pork tenderloins with salt and pepper and add to bag. Seal the bag and shake so that the pork is coated in the marinade. Refrigerate and let marinate at least 2 hours. Remove from refrigerator about 20 minutes before you are ready to cook.
Preheat oven to 450 degrees. Place the pork tenderloins on a rack placed on top of a cookie sheet and roast for 25 to 30 minutes, turning occasionally, until the pork reaches an internal temperature of 140 degrees. Transfer to a cutting board and allow to rest 10 minutes.

Topping: Meanwhile, in a large saute pan over medium heat, melt the butter and add the onions and peppers. Allow to cook for 10 minutes, stirring occasionally to keep them from burning. Add brown sugar, vinegar and salt. Cook until the liquid evaporates, about 20 minutes, stirring often. To assemble the sliders, slice the pork into 1-inch-thick slices. Stuff each roll with a slice of pork, a slice of apple and a spoonful of caramelized onions & peppers. Serve immediately.

The next recipe features “tangy zesty flavors that just work together.” Gara Pollock from Durham won the 52 Ways to Love Sweet Potatoes Contest at the N.C. State Fair with this entry. This frittata is perfect for dinner anytime of the year.

Preheat the oven to about 350 degrees. Thinly slice onion and dice the sweet potato into little cubes. I use a large cast iron skillet for this; you want to use a skillet that can go into the oven to bake. Heat oil over medium heat in the skillet and then add onion. Cook onion over medium heat for about 3 minutes, and then add the cubed sweet potato.
Sprinkle sweet potatoes and onions with salt. Add about ½ a cup of water and cover the skillet with large lid or foil until the potatoes get soft. About ten minutes. Remove cover and cook until all the water evaporates. Add corn and cook until vegetables begin to caramelize. Meanwhile open your black beans and drain off all the juice. Once potatoes, onions, and corn begin to brown add in the black beans and toss it all around until well mixed. Beat eggs with ¼ cup of milk and salt and pepper. Add egg mixture to skillet. Reduce heat to low so that the eggs don’t burn. Cook briefly until eggs start to set up. Sprinkle cheese and jalapeños all over the top. Put skillet into the oven and bake for approximately 10-15 minutes until eggs are cooked. I then usually turn on the broiler and broil until cheese gets all bubbly. Remove from oven. Slice like pie. Top individual slices with salsa and sliced avocado. Sprinkle with hot sauce and enjoy!

The next recipe is for a dessert that Lisa calls “super easy” and it takes about 3 minutes in the microwave to make. Plus you probably have the stuff to make it in your cabinets right now.

Add dry ingredients to mug, and mix well. Add the egg and mix thoroughly. Pour in the milk and oil and mix well. Add the chocolate chips (if using) and vanilla extract, and mix again. Put your mug in the microwave and cook for 3 minutes at 1000 watts (high). The cake will rise over the top of the mug, but don’t be alarmed! Allow to cool a little, and tip out onto a plate if desired.

Brian reported that according to the NY Times, this recipe is the most searched cake for North Carolina around the holidays. Lisa got this recipe from her cousin Sabrina back in 1993 and a viewer sent in her mother’s (Polly Boykin of Goldsboro) exact same recipe after seeing Brian’s story air.

Mix cake as directed. Pour into 2, 3 or 4 layer cake pans that have been greased and floured. Bake at 350 degrees for 20-25 minutes depending on size of cake pans and number of layers. Allow cake to cool before icing. Mix together icing and frost cooled cake. Refrigerate.

Lisa notes that “a breakfast casserole isn’t just for the holidays.” She suggests fixing it the night before and enjoy breakfast for dinner. Serve with fruit or a salad and enjoy the leftovers for breakfast the next morning.