Finding emerald ash borer in the winter—what to look for 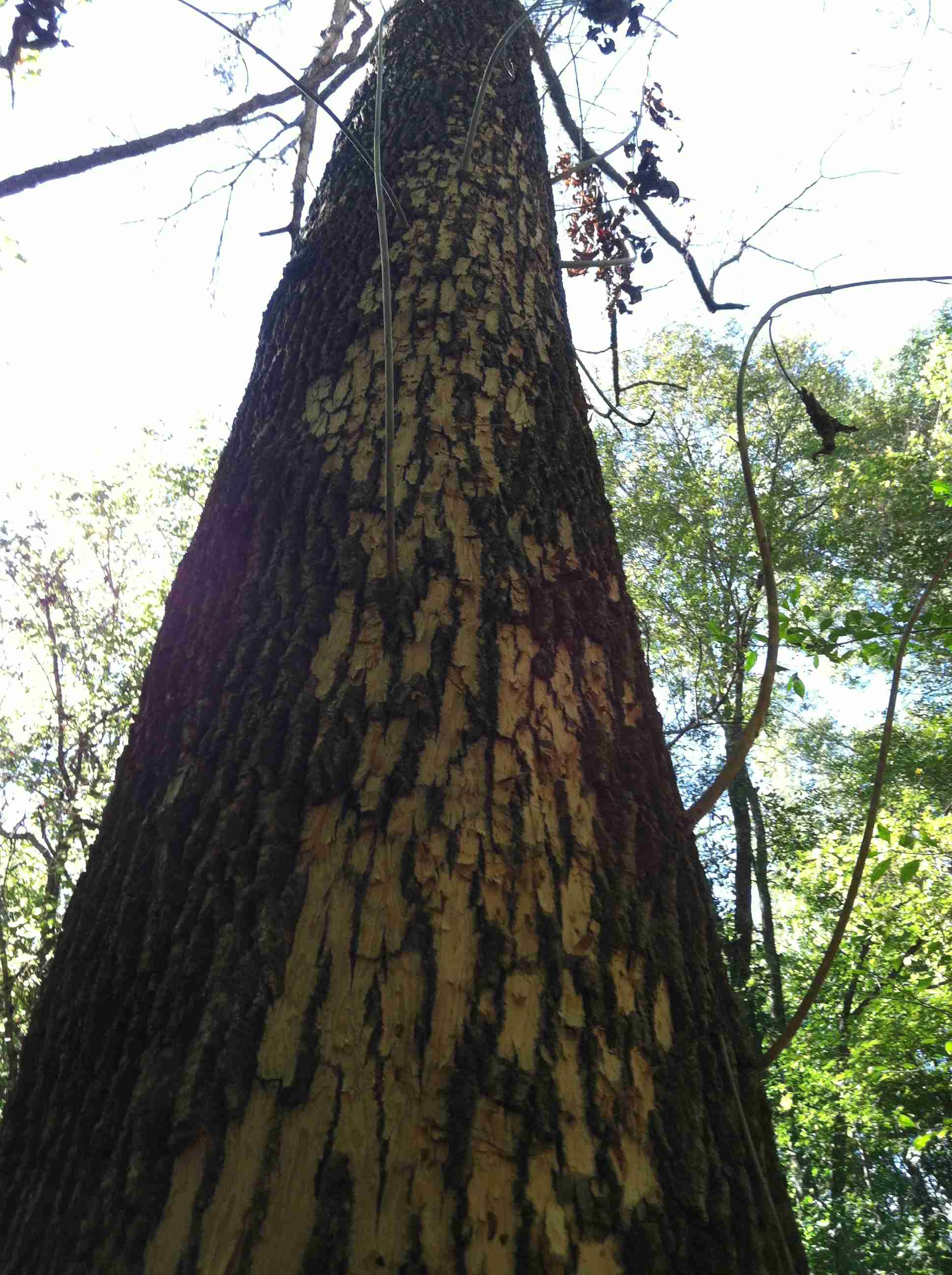 Once signs and symptoms of infestation are present, they are very noticeable and can be observed from a distance when leaves are on the tree.  Infested ash trees exhibit a general decline in tree health.  The crown thins, the tree appears to be dying from the top down, and entire branches may die. In addition, there could be numerous sprouts growing from the trunk of the tree, a phenomenon called epicormic sprouting.  A number of tree ailments can cause these same symptoms, so any ash tree with these symptoms should be observed more closely for more distinctive signs of the insect itself.  Signs of infestation include quarter-inch D-shaped exit holes in the bark and winding, serpentine larval galleries under the bark.   Most formal surveys for the pest are done in the summer when tree decline is obvious.

Just because leaves are off the trees, it does not mean that presence of the beetle cannot be detected.  There may still be indications that emerald ash borer are present even in the winter.  Because they are not as apparent from a distance, finding clues of emerald ash borer infestation involves walking in the woods and keeping a sharp eye out for damage caused by both the insect and its natural enemy: woodpeckers.

The most obvious insect damage visible any time of the year is vertical splits in the bark, which is caused due to trees developing callus tissue around larval galleries under the bark.  The slightly raised bark can easily be pried with a prying tool to expose the larval galleries beneath the bark split.

Woodpeckers find emerald ash borer larvae to be tasty treats.  Since this grub-like, immature insect stage lives under the bark of ash trees, woodpeckers will poke, pry, and knock off bark in order to find their prey.  This is usually observed high on the trunk or on crown branches where emerald ash borers first attack ash trees.  The resulting damage looks like tan colored “flecks” in the otherwise grey to silver colored bark where patches of bark have been removed.  When large numbers of larvae are present, woodpecker damage may look like large strips of bark have been pulled from the tree.

Only ash trees are susceptible to emerald ash borer attacks.  In North Carolina, this includes white, green, Carolina, and pumpkin ash.  In general, ash trees can be distinguished from other trees in the forest during the winter by their twig and branch characteristics and their bark.  All ash trees have opposite leaves and opposite branching — this means that buds and branches form on both, opposing sides of a stem at once.  Ash, maple, dogwood and

Twig and bark of green ash. Notice opposite leaves and branching (in winter, scars where leave were present are opposite). Photo by R. Trickel, N.C. Forest Service

buckeyes are the most common trees with opposite leaves and branches, contrasting with most other tree species which have alternating buds.   Bark on white and green ash (the two most commonly found ash species found in the state) is ashy grey to silver in color with deep furrows separating interlacing ridges.  In many instances, the furrows and ridges give the bark a braided appearance.

Enjoy the outdoors this winter and take a walk in the woods.  If you see and identify an ash tree that does not have signs or symptoms of emerald ash borer, enjoy it and wish it luck—the emerald ash borer has just begun its march into North Carolina!.  However, if you suspect based on the signs and symptoms that emerald ash borer is present, report the location of the suspect trees to 1-800-206-9333 or newpest@ncagr.gov.